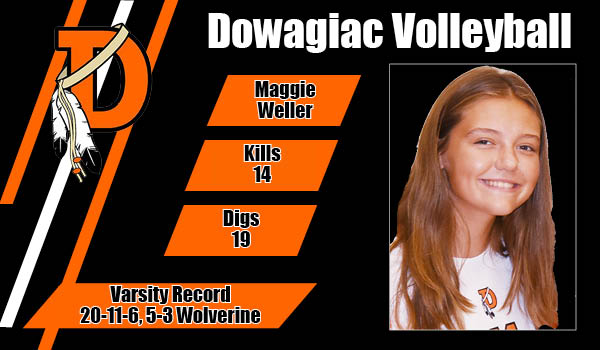 CONSTANTINE — As the end of the regular season approaches, the Dowagiac volleyball team has started to get on a bit of a roll.

The Chieftains were coming off a five-set come-from-behind victory over Wolverine Conference foe Edwardsburg as it headed to Constantine for an invitational on Saturday.

Dowagiac went 3-1 on the day, falling to Division I Kalamazoo Central in the championship match in three sets.

“The ladies played very well in the three victories, some of our best ball-handling all season,” Dowagiac Coach Tony Hooley said. “In the finals, Kalamazoo Central played as well as I had seen them all day, and we just couldn’t put it together. It was a mostly positive day, but always hard to end on a loss.”

The Chieftains continue to get solid play in all three phases of the game — hitting, defense and serving.

Senior Megan Davis had a huge day at the net with 34 kills, while she also had 21 digs, three blocks and three aces. Junior Caleigh Wimberley continued to play well for the Chieftains as she finished with a team-high 33 digs to go along with 24 kills and four aces, Senior Riley Stack ended the day with 22 kills, 18 digs, six blocks, five aces and 39 assists.

Hooley was pleased with the way three of his sophomores played on Saturday.

“Our middles, Abbey Dobberstein and Maggie Weller, had their best outings of the season, and Brooklyn Smith continues to grow and manage the offense extremely well at setter,” he said. “These three sophomores have bright futures in this game.”

Dobberstein had 31 digs, 14 kills, a team-high eight blocks and two aces, while Weller added 14 kills, 19 digs and five blocks to the Chieftains’ totals. Smith finished with a team-high 47 assists to go along with 13 digs.

“Like they have all season, our pin players — Megan Davis, Riley Stack and Caleigh Wimberley — put up big numbers in every phase,” he said. “Those three are the heartbeat of this team.”

Dowagiac is back in action Monday as it hosts Lakeshore, Berrien Springs and Coloma in a quad, which is scheduled to begin at 5 p.m.