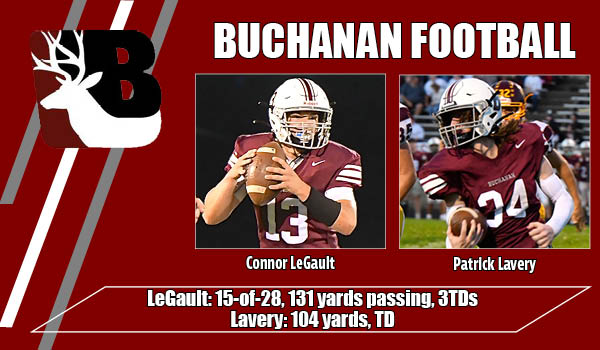 BUCHANAN — In the closing seconds of its non-conference game with Benton Harbor, Buchanan pulled out a 26-20 victory at Memorial Field Friday night.

Bucks’ quarterback Connor LeGault tossed his third touchdown pass of the game, this one with 3.3 seconds remaining to Brady Thompson for the winning score. LeGault followed up the 9-yard touchdown toss with a 2-point conversion run as Buchanan rallied from a 22-6 halftime deficit.

In the second half, the Bucks (3-5) shut out the Tigers, who came into the game winners of two straight. Buchanan scored three times in the final 12 minutes to earn the victory.

Dillon Oatsvall caught a pair of LeGault touchdown passes in the fourth quarter. His first one covered 13 yards, while the second was a 9-yard toss from LeGault that cut the Benton Harbor lead to 22-20.

The Bucks got on the board first on 9-yard Patrick Lavery run. Buchanan failed on all of its conversion attempts except for the final touchdown.

The Tigers (2-7) got a pair of Davionte Tasker touchdown passes in the first half and a 71-yard interception return by Rodney Ford for a score as it led 22-6 at halftime. Tasker’s touchdowns were to Ford, good for 34 yards, and Javon Mason, which covered 19 yards.

Buchanan finished the night with 287 yards of total offense, compared to 216 for Benton Harbor.

LeGault finished the night 15-of-28 for 131 yards and three touchdowns. Lavery added 104 yards on 21 carries and a score.

Buchanan will wrap up its season Friday night when it travels to Centreville to face the defending Division 8 state champions. Kickoff is scheduled for 7 p.m.