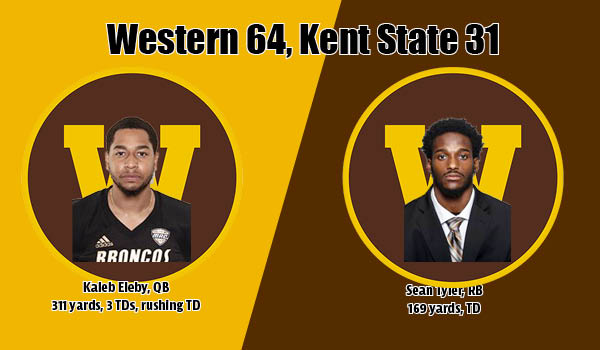 The Broncos (5-2, 2-1 MAC) racked up a season-high 652 yards of offense on the back of 341 yards rushing and 311 yards through the air. Sophomore running back Sean Tyler had a career-high 169 yards on 17 carries and a touchdown. It was the third time that Tyler broke the century mark in his career. Redshirt sophomore quarterback Kaleb Eleby was 15-of-22 passing with 311 yards and three touchdown passes, while rushing for 33 yards and a touchdown. Skyy Moore and Jalen Hall each had 144 yards receiving with Moore leading the game with eight receptions, including two touchdowns.

Kent State had the best offense in the MAC, averaging 464.2 yards per game, but Western Michigan held them to just 362, including 149 in the second half. Junior linebacker Zaire Barnes and Corvin Moment each had eight tackles on the day. Barnes had 2.5 tackles for loss and a half sack, while Moment had three tackles for loss, a sack and a forced fumble that the Broncos recovered. WMU had five sacks in the game and 12 total tackles for loss.

WMU’s scoring prowess and ability to force Kent State into two early punts gave the team a 23-17 lead at halftime.

The Broncos rolled in the second half with Moment, forcing a fumble on KSU’s opening drive. Eleby helped WMU march down the short field and Jefferson capped it off with a 13-yard touchdown run to push the lead to 30-17.

The Golden Flashes were forced to punt on their next drive and WMU took over on its own 43. A pass interference call on KSU helped the Broncos move into opposing territory. Tyler rushed for 12 yards down to the Kent State 26, and on the next play, Eleby found Moore for 26-yards and a touchdown on an acrobatic catch by the sophomore wide receiver.

Western Michigan’s defense forced another three and out and the Broncos took over on the Kent 40. Eleby hit Moore for 11 yards and then senior Jaxson Kincaide ran it into the endzone from 26 yards out for his first touchdown.

WMU capped off the four-touchdown third quarter with a 64-yard run to the house by Tyler.
In the fourth quarter, Kincaide and Eleby each added rushing touchdowns as the Golden Flashes were held to just 14 points in the final 30 minutes of play.=

The Broncos continued their dominance in time of possession, holding a 37:41-22:19 edge over KSU and went 5-for-11 on third downs. The Golden Flashes were 3-for-14 on third downs on the day.
Western Michigan hits the road to take on Toledo Saturday at 3:30 p.m. on CBS Sports Network.