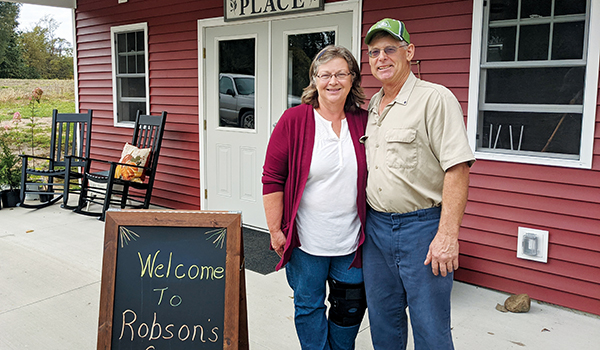 BERRIEN TOWNSHIP — Tucked away in the township countryside is a new shop run by familiar faces in the farming community.

Robson’s Country Store — owned and operated by Dale and Deanna Robson of Robson Farms — is open from 10 a.m. to 6 p.m. Tuesday through Saturday. The store features USDA-certified pork and bacon from the farm as well as beef products from local farms, all of which is vacuum-sealed and stored in freezers for freshness.

Rapha Roast Coffee Company and Sticky Spoons Jams — a jam, jelly and maple syrup business owned and operated by Dale and Deanna’s daughter-in-law and Navy veteran Aiye Akhigbe — will also have products in the store. Other items include local honey, peppers, butternut squash and eggplants.

The farm announced the store’s opening on Facebook Wednesday, Oct. 6. As of Thursday evening, the post has received 250 shares and 155 reactions.

“That was pretty exciting,” Dale said. “It shows that people are interested in the products that we are offering.”

Founded in 1959 by Dale’s parents, Robson Farms is a “wean to finish” operation that sells more than 15,000 pigs a year.

When the COVID-19 pandemic began affecting the number of pigs the farm could sell, the couple decided to come up with a different way of moving their product.

“The more we were selling to people privately, the more people asked us for cuts of meat,” Deanna said. “It kind of just came into our heads that maybe we should do this.”

Built on their existing garage with the help of friends and family, the Robsons poured the cement foundation for the 24- by 28-foot building in January, began construction on the building itself in May and was completed last week. Deanna will handle most of the day-to-day operations for the store.

“It’s kind of nice having people come in,” she said. “I get to visit with the people, share a story, or I’ll get them interested in a new product or something.”

The shelf behind the register, which holds pictures from the early days of their family’s farms, is a wooden beam from Deanna’s grandmother’s barn, which was originally built in the late 1800s before being torn down.

“We were trying to put our history up there so people realize we’re not just selling these goods,” Deanna said. “We know where this stuff comes from. We know how to do this because we come from that background.”

The Robsons plan to expand its selection of goods to include herbs, spices and more.

“We are looking for some different items to go in here,” Deanna said. “Next summer, we plan to have more vegetables available. We’re hoping to expand as much as we can.”

“We’re trying to see if we can draw people here with other things and hopefully they see the quality of what we have to offer,” Dale said.

For the Robsons, being able to provide a space where customers can purchase quality meats, produce and more from local farms and vendors means everything.

“We’re trying to help them out by moving in their products and getting the product out there as fresh as possible,” Deanna said.

“It’s ‘farm to fork,’” Dale said. “We have quality products, as do our friends. One of the reasons we wanted to open this store was to give customers the experience of having a good product.”