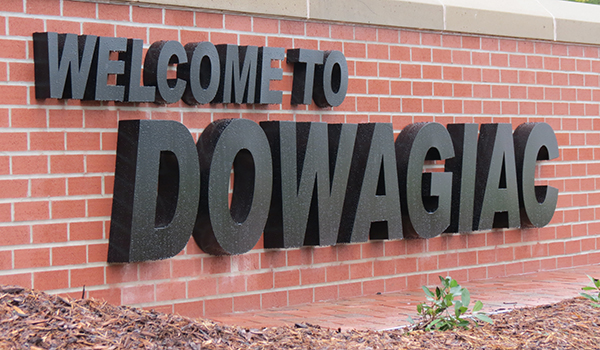 DOWAGIAC – Brick by brick and letter by letter, a new city landmark is coming together.

The club’s centennial sign, located on the piece of land bordering the intersection of M-51 and M-62 in front of Rite Aid in Dowagiac, has undergone some delays due to supply line shortages, but Crandall said the end is in sight.

“Like so many people and projects, we’ve had our share of challenges,” said Crandall, of the delays. “But we’re making progress.”

The project, which has been in the works for roughly three years and finally broke ground in July, was implemented to commemorate the 100-year anniversary of the Dowagiac Rotary Club, which was founded in 1920.

Crandall said while the remaining steps, which include getting a permit for electrical work as well as installing two 18-inch rotary logos, may still take another three to four weeks. The logos, like the letters, were for several weeks, are in a supply-line delay.

“We’re at their mercy,” Crandall said, of the supplier. “That just happens in construction.”

With the letters up on the sign, residents will no longer have to wonder what the project is all about.

“People are like, ‘What’s that wall doing there,’” said Crandall, adding that if people got a subscription to the newspaper, they would know. “It was our idea for a gift to the city. … We’ve had great support from the city, and they’re all very excited about this.”