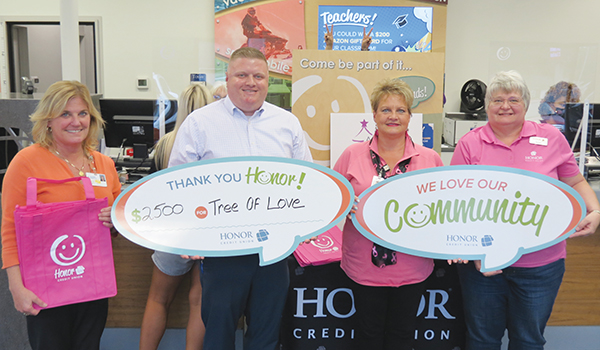 Honor Credit Union of Dowagiac, 56337 M-51 S, donated $2,500 to the Ascension Borgess-Lee Foundation on Tuesday, Oct. 12 to kick off a fundraising effort for the Tree of Love campaign, which since 2011 has provided mammograms and other breast cancer services to women who would otherwise not be able to afford them.

“Cancer sucks, as we all very much know,” said Honor Credit Union Community Assistant Vice President Janie Reifenberg, adding the Dowagiac branch also has a booth set up with pink bags and other pink items to bring attention to the Tree of Love campaign. “It’s important to make sure we’re spreading the word not only amongst our own team members but the community as well. Any way we can help partner in the community with something this important, we are all about it.”

Organizers said since the Tree of Love campaign started, the number of women who have taken advantage of services has significantly gone up, with roughly 35 to 40 women in the community receiving over $6,000 worth of services in the last year alone.

Pruitt added that while the fundraising campaign has been successful, the donations often exceed the number of people using the funds, which is why getting the word out is so important.

“The more we can spread the word together, the more good that can be done,” Reifenberg said. “A lot of people just don’t know how they can help, where can they give, how to make a donation.”

While donations are accepted year-round, the campaign officially began Oct. 1 and runs through the end of December. This year, the campaign has set a goal of $17,000.

The fundraiser kickoff ceremony will happen Friday, Oct. 22 at the Dowagiac home football game against Niles. The game will be a “pink out,” and feature a donation ceremony in between the first and second quarters.

Each $8 donation designates one light on the Tree of Love, which will be lit in a ceremony at 5:30 p.m. Wednesday, Dec. 1 in Farr Park next to the hospital. An $80 donation provides a mammogram to a woman in need. Donations can be made at Ascension Borgess-Lee Hospital, Honor Credit Union or by visiting borgessleefoundation.org/en/donate.

“With your continued support, we can expand services like screenings, mammograms

and ultrasound-guided biopsies for uninsured and underinsured women in Cass

Those in need of breast cancer services can contact Ascension Borgess Central Scheduling at (269) 226-6999. For further questions, contact Cripe at beth.cripe@ascension.org or (269) 783-3026.