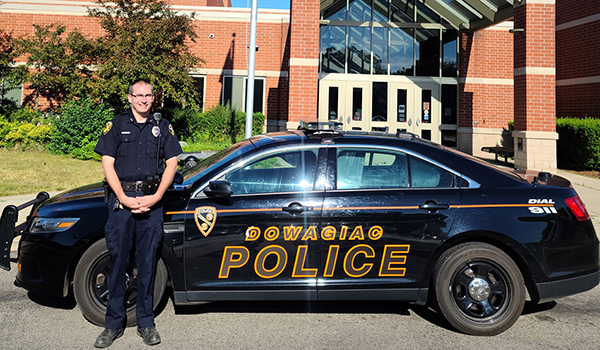 DOWAGIAC — A longtime police officer with the Dowagiac Police department is hanging up his badge.

After 25 years with the department, officer Ryan Murray has retired from his position, but has left behind a legacy that will be remembered by his fellow officers, the community and especially Dowagiac Director of Public Safety Steve Grinnewald.

“Ryan was always one to look out for the other officers at the department,” Grinnewald said. “He was always concerned about serving the community and making sure the department was going in the right direction. Anyone in this profession gives a great deal of sacrifice. I think of all of the nights, weekends, and holidays that were given up over that 25-year period that he and his family had to deal with.  Something that each one of us understands and accepts when we get into this profession. Ryan did just that.”

Over the years, Murray has worked as a patrol officer, property room officer, bike patrol instructor and most recently as the School Resource officer for Dowagiac Union Schools.

“Ryan put his heart and soul into the school and the kids he worked with.  It was very important to him and something he took very seriously,” Grinnewald said. “The relationships he was able to build will stay with him as well as with the department in the future.  We have been able to build a strong relationship with the school system and that is in large part due to Ryan’s work over the years.”

Grinnewald added that Murray’s ability to connect with people was crucial to his success as resource officer.

“He has a calm demeanor and was approachable,” Grinnewald said. “He worked very well with school staff on solving problems.  Being assigned to a position like SRO is something that you want to do versus something that you have to do.  Ryan had the excitement and drive to take on this position and did a great job at it.”

Murray’s quick wit and sense of humor was also an endearing quality that helped with his approachability, according to Grinnewald.

“He was always quick with a joke or observation that would help lighten the mood when it needed to be,” said Grinnewald, adding that he will also miss the knowledge he brought through his years of service. “We are a younger department and it’s difficult to replace 25 years of experience.”

While he is moving on from the department, Grinnewald said Murray will remain a part of the Dowagiac Police Department family forever. Murray could not be reached for comment, as he is already out in Colorado leading guided hunts, according to Grinnewald.

“We are a family at the Dowagiac Police Department and one of our family members is moving on to other interests,” Grinnewald said. “We always miss family, and he is definitely always welcome back to visit.  He is a part of this department for the rest of his life as well as anyone else that has been here and left over the years.”