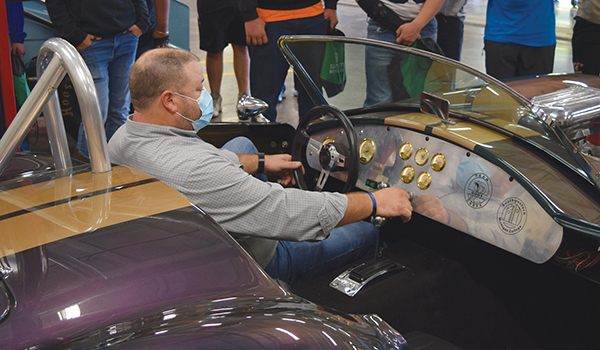 The day aims to show students the latest in auto technology, officials said. Professionals from Snap-on tools and Bosch shared insights and hiring tips with students interested in these careers.

Chrysler introduced new 1986 models by touting them as having more computing power on board than the Apollo spacecraft which landed on the moon in 1969. SMC officials said that is nothing compared to mobile phones’ computing power. Mechanics gradually gave way to technicians knowledgeable in diagnostics and electronic mechanical systems, underlining the need to constantly develop new skills.

In the 1990s-2010, vehicle technology prevailed. Scan tools shrank from something bulky to huddle around to palm-sized devices that nevertheless deliver more information.

Those training today to become tomorrow’s technicians contend with advanced driver-assistance systems that assist with driving and parking — the next step toward driverless vehicles. Technicians capable of understanding such systems will be in high demand.

Car and Driver magazine reported that 45 percent of the cost of an average new vehicle is due to electronics, up from 18 percent in 2000, as technology constantly changes.

“You’re going to see driverless technology,” students heard. “A vehicle owner might send their car to your shop for repair rather than bring it in person because that car will be capable of driving itself. In the future they will be able to fix themselves. With 3D printing, you might not have to wait for a part. It sounds far-fetched, but it’s already happening. The need for constant learning and development is always going to be there,” which is why Zolman Best One Tire and Auto Care owner Nate Zolman at 52 is pursuing a University of Notre Dame graduate degree.

Established in 1978 in Mishawaka by his father, Bud, Nate led an expansion after graduating from Ball State University in 1992 as a varsity swimmer. He speaks to students ages 18-22 as both an employer of 120 people and a dad of four college students, with a fifth in high school. Zolman grew into six locations in Mishawaka, Granger, South Bend and Niles.

“I’m not looking for experience,” Zolman said. “I’m looking for character and attitude, that you want to learn. Show up 15 minutes early. Be willing to clean bays, paint and listen to more experienced technicians,” who command six-figure salaries. “Don’t just think ‘mechanic.’”

Tim Dooley, of Illinois, a 27-year veteran and territory sales manager for five states for Bosch Automotive Service Solutions, talked about charging stations. EV sales only accounted for 1.17 percent in 2017, but “we expect it to be a whole lot more in the next five years,” said Dooley, who finishes his bachelor’s degree in December.

“There are three types, battery electric vehicles, like a Tesla; plug-in hybrid electric vehicles which have gas engines — more or less a lawnmower — in back that generate electricity to charge the electric battery while it’s being propelled down the road; and hybrid EVs, like a Toyota Prius and, soon, the small Ford Maverick pickup truck. Infrastructure is projected to expand 39 percent by 2025, with an additional 36 percent by 2030. Formula E racing is switching to all-electric engines. They don’t make the fun noise they used to make. Every transportation platform we know, we are looking at electric options — fully electric planes, trains, automobiles and semis. Nine million charging stations are going to be needed by 2030.”

Students interested in SMC’s automotive program can find more information at swmich.edu/academics/degrees-and-certificates/automotive-technology/ and apply for free at swmich.edu/admissions/apply.