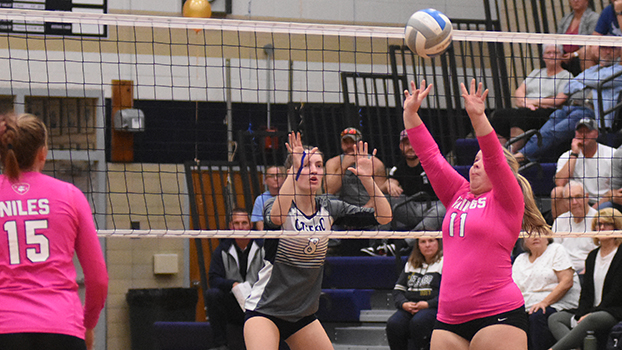 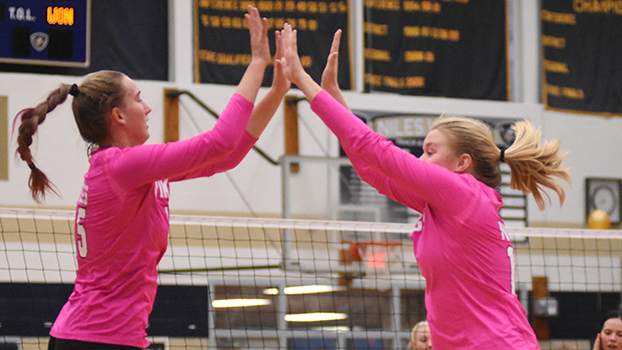 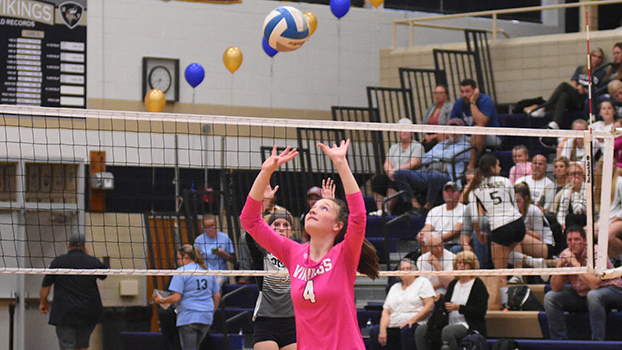 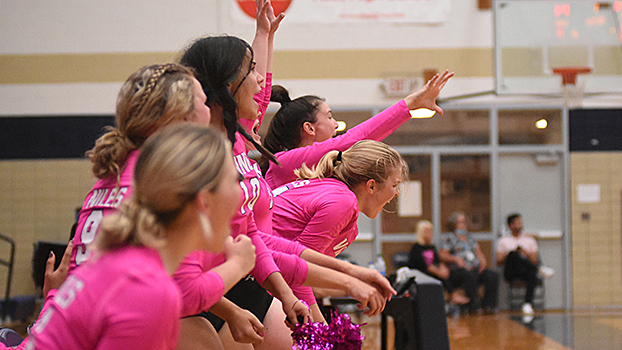 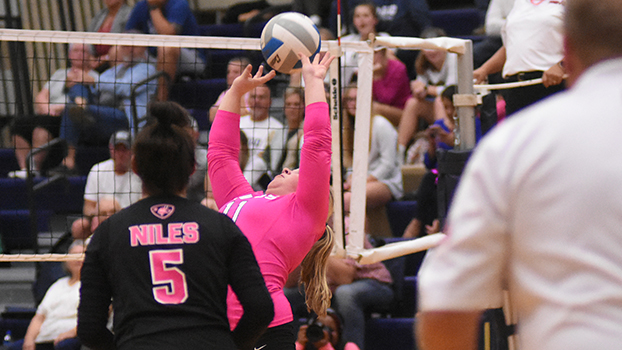 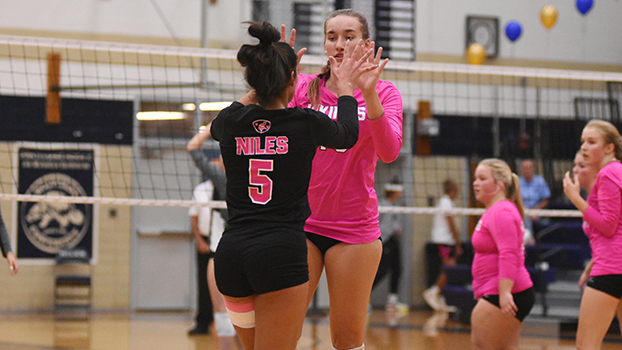 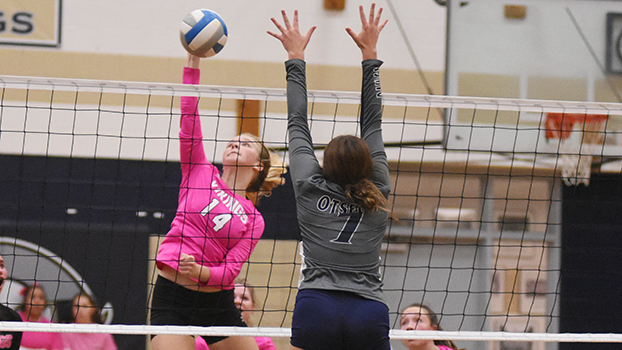 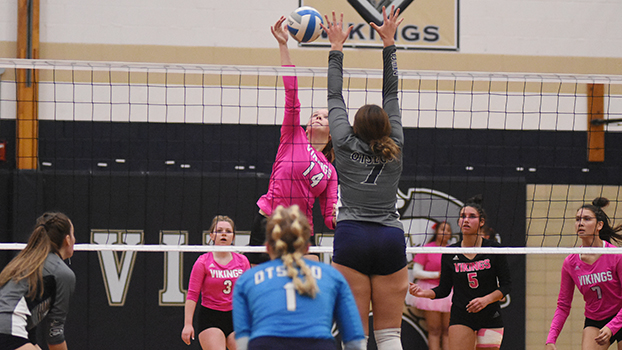 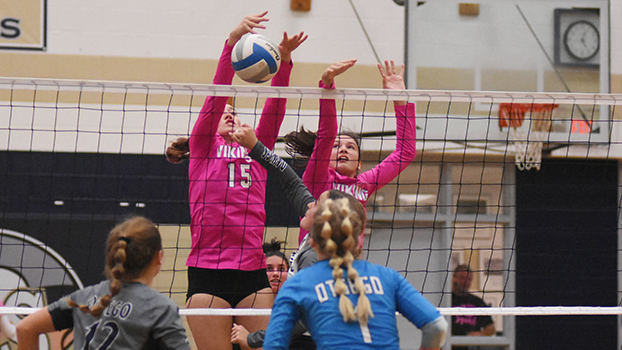 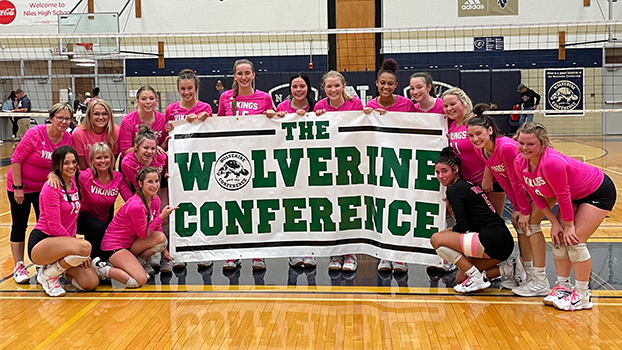 NILES — What a debut for the Niles volleyball team in the Wolverine Conference.

The Vikings, ranked No. 9 by Prep Dig, swept No. 21-ranked Otsego 3-0 to capture the outright league championship Thursday night.

The Niles win, coupled with Dowagiac’s 3-2 win over Edwardsburg, gave the Vikings a two-game lead over both the Bulldogs and Eddies with one match remaining. Niles will head to Dowagiac Thursday night with an 8-0 conference record to face the Chieftains, who improved to 5-3 with the win over the Eddies, who like Otsego, are now 6-2.

“We are very excited,” said Niles Coach Jenny Nate, who was grinning ear-to-ear after the win on Senior Night. “It was well-deserved. The work that they put in, and the energy they bring daily, like even tonight, at this point in the season, you can see that they are continuing to put in the work. They are getting scrappier and tougher.”

Nate and her team, 39-8 overall and nine games short of tying the school record of 48 wins set in 2016, had a specific game plan for the Bulldogs.

“We wanted to keep them guessing,” she said. “All of our hitters had to be on. We needed to be really smart and patient with the ball and outlast them in the rallies so that when the set was there, we could put it away.”

That is what the Vikings did. They grabbed early leads in sets one and two, overcame lulls during the middle of both sets, and then took advantage of the momentum created by a big kill from one of its dominating front-row players.

Seniors Marika Ruppart and Amara Palmer had big nights at the net as they combined for 11 kills and five blocks. Junior Jillian Bruckner led the team with 11 kills and eight blocks.

Senior Emma Beckman added five kills, three blocks, 14 digs and 16 assists. Beckman was excited to win the conference title in a new league, which follows up the BCS Athletic Conference Red Division championship the Vikings won last year, its only year on that conference.

“It is so exciting,” she said. “This team is so good. I think our energy is through the roof every single game. If we are down and someone gets a big point, we go crazy. I think it intimidates other teams.”

Ruppart was happy to clinch the championship in the final home match of her career.

“It adds an emotional component to it,” she said about winning on Senior Night. “I cried a couple of times already today. It was a good match. We brought a lot of energy.”

Ruppart agreed with Beckman about riding the emotion of the team.

“We definitely feed off of each other’s successes,” she said.

The Vikings were good in all phases of the game against the Bulldogs — hitting, defense and serving. Nate said that is a trademark of this team.

“It really is about the fundamentals,” she said. “It is about putting the work in and the buy-in. I think taking care of your teammates. That is a huge component in it. Everybody played tonight and they do their jobs.”

The only player who did not hit the court Thursday night was sophomore Zyon Brazo, who is still recovering from an injury, but could be cleared to play as early as next week.

Niles will head back to the gym and begin preparing for their Dowagiac match before wrapping up the regular season with a road game at Battle Creek Harper Creek on Oct. 23.