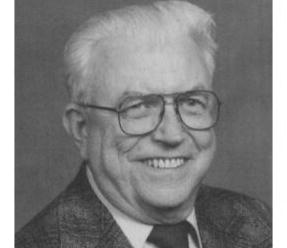 Morris Lee Dahl went home to be with the Lord on Sunday, Oct. 10, 2021. He was a member of the Faith United Methodist Church in Buchanan.

Mr. Dahl was born on April 10, 1926, to Lester and Bertha Dahl in Mishawaka, IN. he was a member of the Mishawaka High School class of 1944. He attended his higher education at Indiana University, Bloomington, Indiana.

He served many years with the Boy Scouts of America where he was a swimming and lifesaver instructor, a Cub Master, Assistant Scout Master, followed by a few years as the White Beaver Scouting Commissioner. He was a Vigil member of the Order-of-the-Arrow, which is the highest award the scout district gives to adult leadership.

Mr. Dahl was also a very active member of the Niles Lions Club, serving three terms as president and 29 years as the club secretary. The district awarded him a plaque for the most outstanding editor of the “Lion’s Tale” which is the monthly bulletin of the club. In October 2016, the Niles Lions Club nominated him for the Melvin Jones Fellowship Society (this is an international award).

He and his wife enjoyed camping with friends and family and wee members of the St. Joe Valley Hobos and served a term as president.

Mr. Dahl retired from Garden City Fan & Blower Company in June 1990 after 35 years of service. He was very active in the South Bend Chapter of the National Purchasing Association until his retirement.

Mr. Dahl’s wife, Elizabeth “Skipper” preceded him in death on February 25, 2014. Also preceded in death was a sister, Virginia.

Visitation for Mr. Dahl will be on Thursday, Oct. 14, 2021, at Faith United Methodist Church, 728 N. Detroit Road, Buchanan from 10 a.m. to noon. A funeral service will begin at 12:00 noon at the church. Interment will be at Mission Hills Memorial Gardens next to his beloved wife of 63-plus years.

Memorial contributions may be made to the Faith United Methodist Church, The Niles Lion’s Club or Center for Hospice Care, Mishawaka, Indiana.

Condolences to the family may be made at halbritterwickens.com.