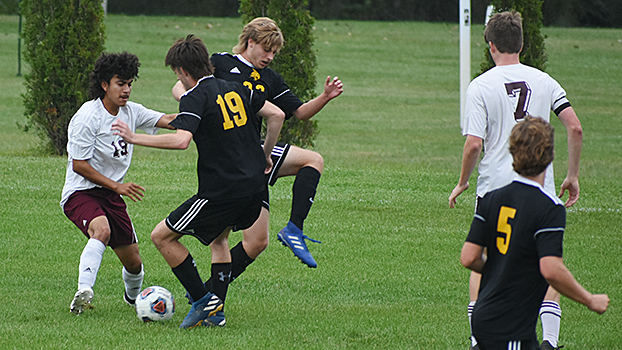 BUCHANAN — A few changes to the lineup helped host Buchanan blank arch rival Brandywine in the opening round of the Division 3 District Soccer Tournament Wednesday night.

The Bucks were defeated by the Bobcats 4-2 in the final BCS Athletic Conference soccer match of the season seven days ago.

That night, Buchanan was missing goalkeeper Mason Frontzcak, and had to move Murphy Wegner into the net, which hurt the Bucks on defense. All that changed Wednesday night as Frontzcak was back between the pipes and Wegner helped orchestrate a 4-0 victory for Buchanan and a trip to the district semifinals next week.

Buchanan will face the winner of the Coloma at Watervliet match, which was moved from Wednesday to Friday night. The winner of that match will host the Bucks Monday.

“Our freshman goalkeeper was injured, so we had to make a few adjustments the last two or three games,” said Buchanan Coach Russ Philip. “We had to take our stud center-back captain and put him in the net. And when you do that, it changes the whole dynamic, especially in the back.”

Logan Grwinski gave the Bucks a 1-0 lead with 26:30 remaining in the opening half. Robles picked up the hat trick in the second half, with his final two goals coming after a 30-minute weather delay.

Brandywine Coach Caleb Adams noticed a different Buchanan team from last week when his squad defeated the Bucks for the outright BCS championship.

“They showed up and they played more of an attacking game,” he said. “Number 10 [Robles} killed us on that sideline. We saw him last week. He played more of a supporting mid[field] position. But today, playing up on that side, he got some great runs on us and put them in.”

Despite having a 2-0 lead early in the second half, Philip said he was not satisfied with that lead. Once the Bucks extended their lead to three goals, he felt much better about his team’s chances to finish the job. He was also pleased to take the early lead.

“That was everything,” he said. “That gave us the momentum for the rest of the first half. I was nervous at 2-0. That is the worst lead to have in soccer. Once that third one went in, we could take a breath.”

Despite the loss, Brandywine will remember the 2021 season fondly as it captured a division championship.

“We are happy about our season,” Adams said. “If this is how our run ends, it is good for them to take this to the next level.”