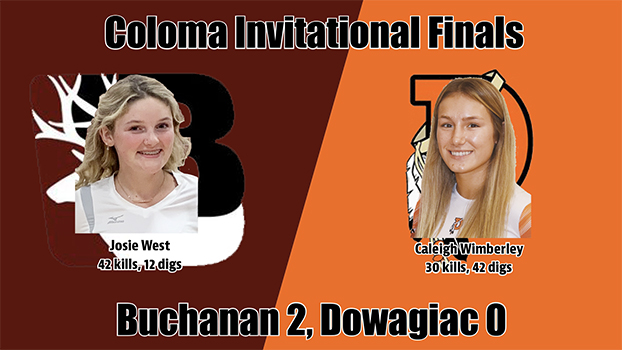 COLOMA — After splitting with Dowagiac in pool play at the Coloma Invitational, the Buchanan Bucks got their revenge by defeating the Chieftains for the tournament championship Saturday.

“On Saturday, I thought we played really consistent all day long,” said Buchanan Coach Shelly Bossert. “Our serve receive was on, so we were able to get some fast kills. It was a long day of volleyball, and I am proud of how they mentally stayed in the games all the way until the end of the day. Josie West played extremely well for us. She had great passes and was able to put the ball away all day long.”

Dowagiac coach Tony Hooley was not pleased with the way his team played, but admired how they battled.

“It was a roller coaster kind of day,” he said. “Sloppy and inconsistent would best describe our day. Other than the Coloma match, we couldn’t put together two complete 25-point sets against anyone else. Serving has been a strength all season, but today wasn’t our best effort in that phase. But, I will get them credit for clawing their way to the finals, especially during a long and tiring homecoming week.”

Dowagiac heads to Edwardsburg Thursday for a Wolverine Conference match scheduled to begin at 6 p.m.

The Bobcats are now 20-11-2 on the season heading into Wednesday’s BSC Athletic Conference match at Berrien Springs. Play is scheduled to begin at 6 p.m.