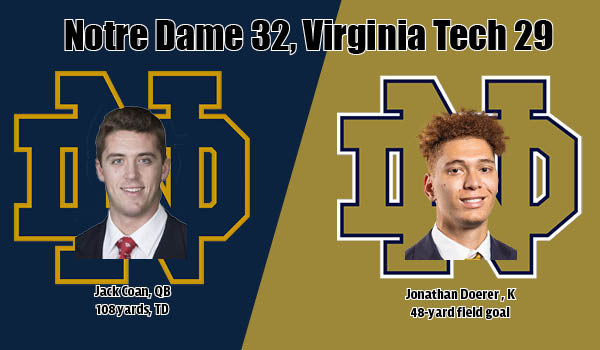 BLACKSBURG, Va. — It was another close call for the Notre Dame football team as it escaped Virginia Tech with a 32-29 come-from-behind victory Saturday night.

The Fighting Irish (5-1) took full advantage of the Virginia Tech mistake and scored twice in the final 2:26, including the game-winning 48-yard field goal by Jonathan Doerer with 17 seconds remaining.

“I’ve been in a lot of games, coached a lot of games, but I don’t know that I’ve ever coached a group of guys that had such resolve and mental toughness that regardless of the situation, they just keep playing,” said Notre Dame Coach Brian Kelly. “[They were] unphased by the circumstances. In particular, you take Jack Coan out of the game, who is the first one to pick up Tyler Buchner on the field when he’s hurt, and he’s prepared himself mentally to go back in the game and lead two drives. That doesn’t happen very often.”

Notre Dame tied the score at 29-29 when Jack Coan hit Avery Davis with a 4-yard touchdown pass with 2:26 remaining in the game. Coan then connected with Kevin Austin with the 2-point conversion pass. The Fighting Irish drive covered 75 yards in seven plays.

After stopping the Hokies’ offense, Notre Dame went 45 yards in seven plays to set up the Doerer field goal.

Notre Dame rolled up 401 yards in total offense, including 180 yards on the ground. Virginia Tech finished with 321 yards of total offense, which was split between 134 yards rushing and 187 yards passing.

The Fighting Irish will take some time off before hosting USC at Notre Stadium Oct. 23.