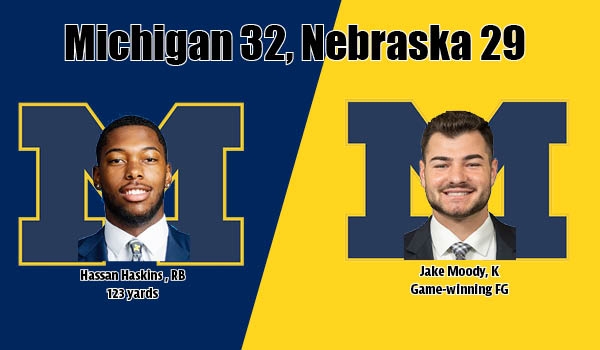 LINCOLN, Neb. — A late fourth-quarter forced fumble and recovery by Brad Hawkins led to a Jake Moody 39-yard field goal to give the University of Michigan football team a 32-29 victory at Nebraska Saturday night at Memorial Stadium.

Making its first trip to Lincoln under head coach Jim Harbaugh, Michigan (6-0, 3-0 Big Ten) fought off a second-half Nebraska rally. The Wolverines held a 13-0 halftime lead, but the Cornhuskers scored all 29 of their points in the second half and were marching on what appeared to be a game-winning drive.

With the score tied 29-29, Hawkins punched the ball free of the grasp of Nebraska quarterback Adrien Martinez, picked up the ball and ran 19 yards before being tackled at the Cornhuskers 18-yard line. U-M ran the ball three straight times, costing Nebraska all three of its timeouts, to set Moody’s game-winner with 1:24 remaining — one of four field goals on the night.

After a three-and-out on Michigan’s opening drive, the Wolverines defense stymied the Cornhuskers on a fourth-and-goal attempt from U-M’s 2-yard line. Hawkins knocked Nebraska’s Martinez out of bounds for a one-yard loss, giving the ball to the Michigan offense on downs. Both squads exchanged five scoreless possessions as the first quarter ended with Nebraska outgaining Michigan, 101-60.

Daxton Hill opened the second quarter nabbing his fourth career interception after tipping a pass intended for Austin Allen and snagging the ball while falling to the ground, giving Michigan the short field at the Nebraska 35. As the Cornhuskers defensive line stopped Michigan’s momentum, it settled for a 35-yard Moody field goal to take the game’s first lead, 3-0.

Forcing Nebraska to a quick three-and-out, the Wolverines began their next drive on its own 10-yard line. After moving the Wolverines to their 46, McNamara connected on a 48-yard strike to Mike Sainristil setting up first-and-goal. Haskins burst up the middle for a six-yard touchdown, but the six points were taken away after video review showed Haskins’ elbow hit the ground prior to crossing the goal line.

On the next play, Haskins plunged for what looked to be a 1-yard score, but the TD was reversed following a review that revealed McNamara’s knee hit the turf as he tripped on the snap before handing the ball to Haskins. As a result, Michigan took a 6-0 lead on a 21-yard Moody field goal with 3:19 left in the first half.

A David Ojabo sack ended Nebraska’s push, and the Wolverines got the ball back on its own 24-yard line with 1:40 left on the first-half clock. Michigan quickened its pace, marched down the field, and a 26-yard scamper from Corum set up the Wolverines at the Nebraska 15. After a Cornhusker pass interference call put Michigan on the three-yard line, Haskins made it count with his seventh touchdown of the season and sent the Maize and Blue into the half with a 13-0 lead.

Nebraska put itself right back into the game to open the second half as Martinez connected with Allen on a 46-yard touchdown strike. Michigan countered with Haskins notching his second touchdown of the game from three yards out following a 35-yard completion from McNamara to Daylen Baldwin. However, a failed Michigan 2-point conversion attempt put the Wolverines up 19-7 with 3:36 left in the third quarter.

Two missed assignments by the U-M secondary saw the Cornhuskers capitalize as they struck twice and converted a two-point attempt to take the lead, 22-19, as the third quarter ended. Following a 41-yard touchdown reception by Rahmir Johnson, Nebraska’s Deontai Williams intercepted McNamara pass — the first of his career — putting Cornhuskers on the Michigan 13. A quick screen to a wide-open Levi Falck for a touchdown and a Martinez run for a two-point conversion, the Wolverines found themselves behind for the first time this season.

With the pressure on, the Wolverines went on a 10-play, 75-yard scoring drive capped off by a Corum 29-yard touchdown run up the left sideline to give U-M a 26-22 lead to open the fourth quarter.

After a 30-yard reception by Oliver Martin, a 24-yard run by Johnson and a five-yard touchdown rush by Martinez highlighted an eight-play, 75-yard drive, Nebraska reclaimed the lead, 29-26. On the ensuing drive, Haskins’ highlight-reel 50-yard run, and the Wolverines were right back in business. However, two incomplete pass attempts caused the drive to stall, but another 31-yard field goal from Moody tied the game, 29-29, with 3:00 remaining in regulation.

After Martinez’s fumble and Moody’s go-ahead field goal, Michigan forced a four-and-out to seal the game.

After a bye week, U-M will host Northwestern Saturday, Oct. 23, at Michigan Stadium as the Wolverines and Wildcats battle for the newly established George Jewett Trophy. Kickoff time and television network designation are to be announced.