Big second half lifts Ball State to win over Broncos 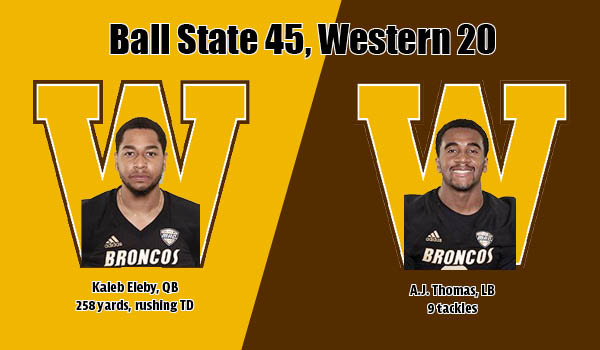 KALAMAZOO — Their Mid-American Conference game may have been tied at 17-17 at halftime, but three second-half turnovers doomed Western Michigan, as Ball State came away with a 45-20 win at Waldo Stadium Saturday.

Kaleb Eleby connected on 20-of-34 through the air for 258 yards and added a rushing touchdown for Western Michigan (4-2, 1-1). La’Darius Jefferson carried the ball 21 times for 65 yards and scored his eighth rushing touchdown of the season. Jefferson’s score extended his rushing touchdown streak to nine straight games. Skyy Moore paced the WMU receiving corps with eight catches for 82 yards. A.J. Thomas collected a team-high nine tackles for the Broncos.

Ball State (3-3, 1-1) got on the board on the opening drive, as the Cardinals hit a 75-yard touchdown on the first play from scrimmage to take an early 7-0 advantage. Western Michigan answered with a score on its first possession, as Jefferson punched it in from one yard out to even the score at 7-7.

After forcing a punt, the Broncos took the ball right down the field again, as Eleby kept the ball on an option play to score from two yards out, putting WMU in front, 14-7, with 3:35 remaining in the opening quarter.

The Cardinals tied it at 14-14 early in the second quarter, and the two teams then traded field goals to make the score 17-17 at halftime.

With 6:44 remaining in the third quarter, Western Michigan regained the lead, 20-17, as Nick Mihalic connected on his second field goal of the contest. Just over three minutes later, Ball State responded with a touchdown to move in front, 24-20.

Ball State struck again early in the fourth quarter to extend the margin to 31-20, and tacked on two more scores over the final period to put the game beyond reach.

Western Michigan is back at Waldo Stadium next Saturday, for its homecoming game against Kent State. Kickoff against the Golden Flashes is scheduled for 3:30 pm, and will be broadcast on ESPNU and the Bronco Radio Network.