White Pigeon deals Cassopolis a blow to its playoff chances 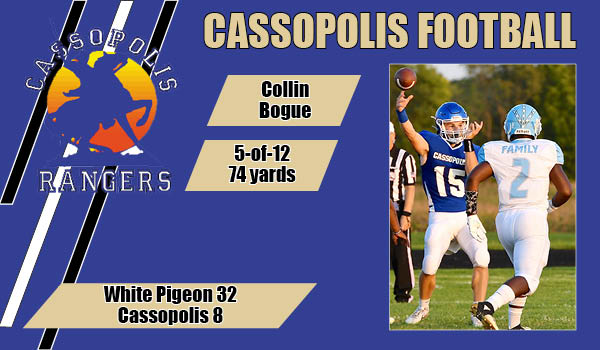 The loss was the second straight for the Rangers, who dropped to 4-3 overall and 3-2 in conference games. The Chiefs improve to 6-1 and are 4-1 in league contests.

The game was deadlocked at 8-8 at halftime, but Cassopolis would never find the end zone again, while White Pigeon scored three second-half touchdowns.

Collin Bogue scored the lone Ranger touchdown on a 3-yard run. Daishean Jamison added the 2-point conversion run to tie the game at 8-8 in the second quarter.

The Chiefs held Cassopolis to 44 yards rushing and 74 yards passing. Bogue was 5-of-12 with an interception.

White Pigeon ended the night with 334 yards of total offense, all of which came on the ground.

The Rangers in all likelihood have to win their final game of the season to have a chance at qualifying for the playoffs. Cassopolis will receive a forfeit from Lakeview Friday night. The Rangers will end the regular season when they host Berrien Springs in a non-conference game at William F. Scott Field.