Niles shut out in second half of loss to Paw Paw 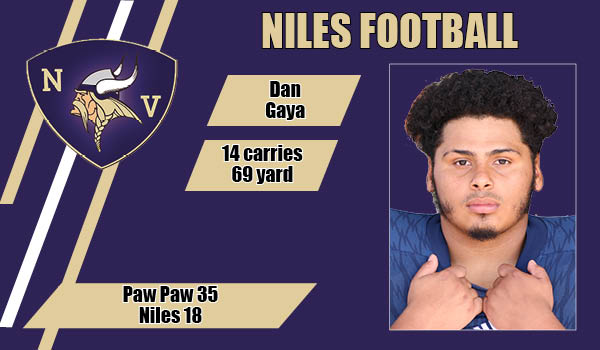 PAW PAW — A scoreless second half spelled trouble for visiting Niles Friday night. The Vikings trailed Paw Paw 14-12 at halftime but were shut out in the second half as the Red Wolves went on to win 35-18 in a Wolverine Conference affair.

The loss dropped Niles to 3-4 overall and 2-4 in league games. The Vikings will likely have to win out to have any chance of qualifying for the postseason. Niles hosts Otsego Friday night before wrapping up the regular season at winless Dowagiac.

At Paw Paw, the Vikings got on the board first as Dan Gaya scored on a 2-yard run, but Niles failed to convert on the extra point.

The Red Wolves (5-2, 4-2 Wolverine) would score back-to-back touchdowns to take a lead it would never relinquish. Cullen Sylvester scored on a 56-yard run and Logan Leonard added a 3-yard run in the second quarter. Paw Paw was able to convert on both kicks by Jose Valverde.

Niles cut the lead to 14-12 before halftime as Julian Means-Flewellen scored on a 13-yard pass from Talon Brawley. Again, the Vikings failed on the conversion attempt.

A 14-point third quarter ended any chance of a Niles comeback.

Sylvester scored his second touchdown of the night, this one from 17 yards out, while Carter Plangger scored on a 37-yard pass from Sylvester to make it 28-12 heading into the final 12 minutes of action.

Sam Rucker scored the final touchdown for the Vikings as he caught a 21-yard pass from Brawley. Niles failed to convert on the extra point.

Sylvester capped the scoring with a 17-yard run before Valverde added the extra point to make it 35-18.

Sylvester rushed for 140 yards and scored three touchdowns, while he was 1-for-1 for 37 yards and a touchdown.