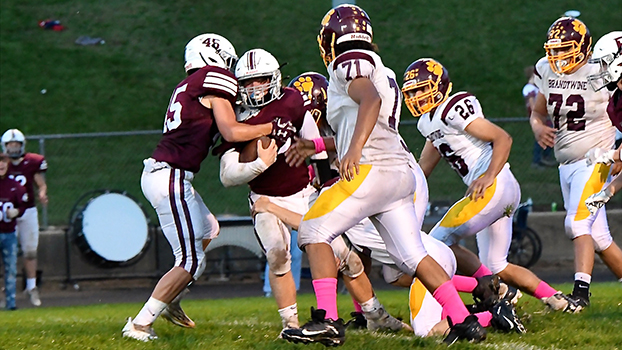 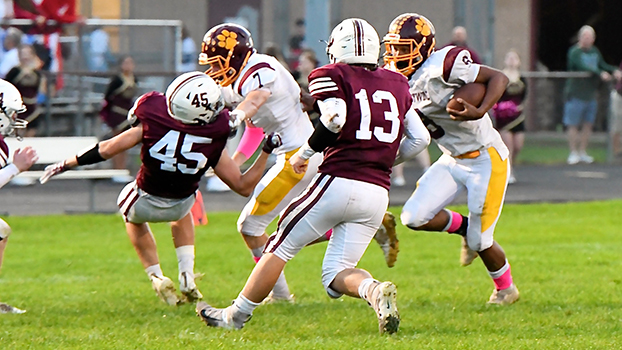 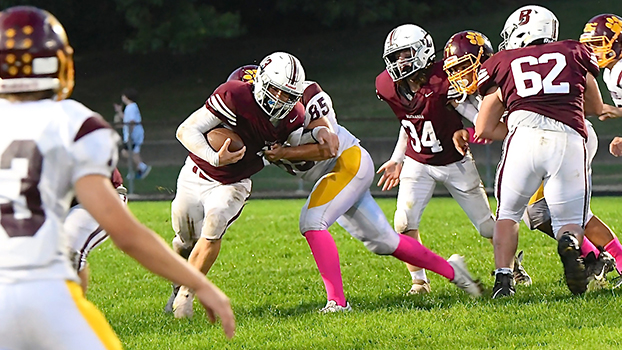 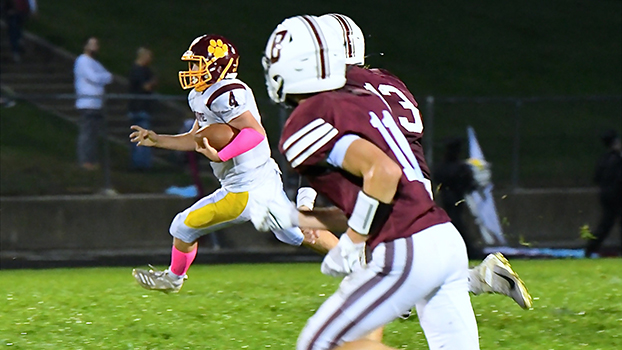 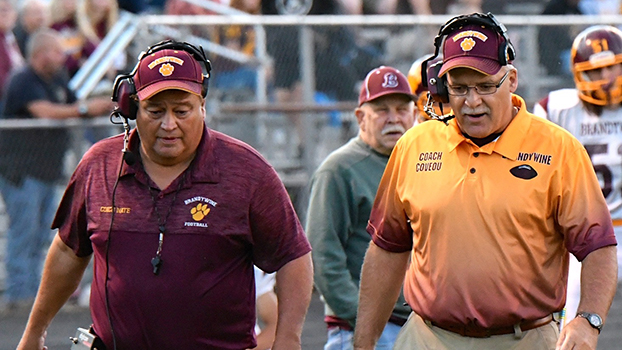 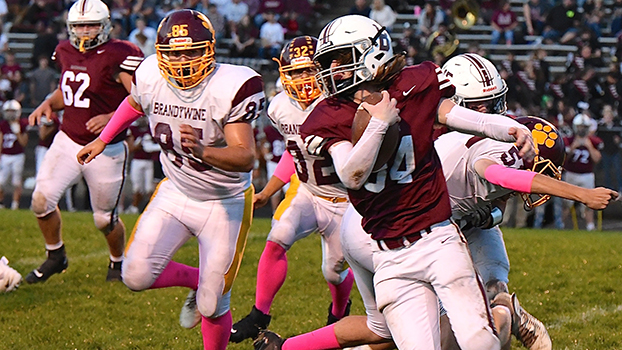 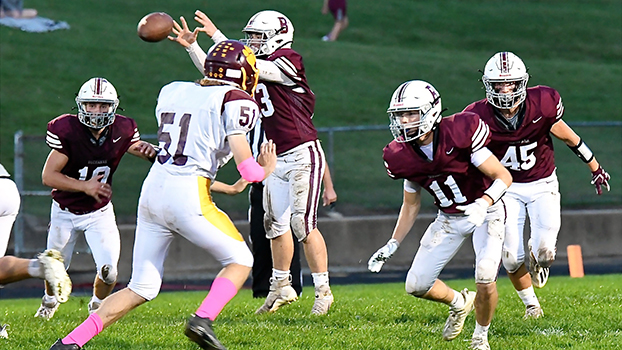 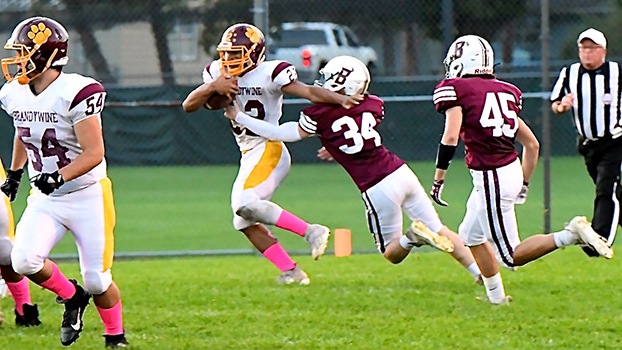 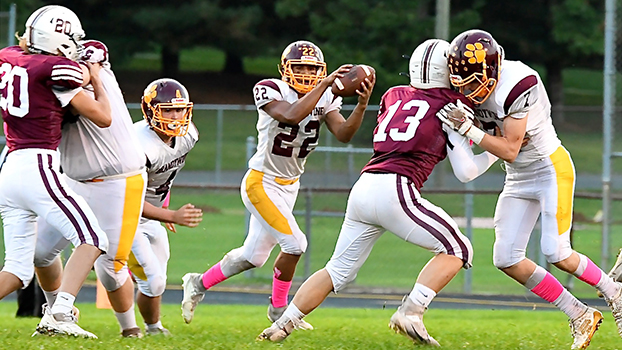 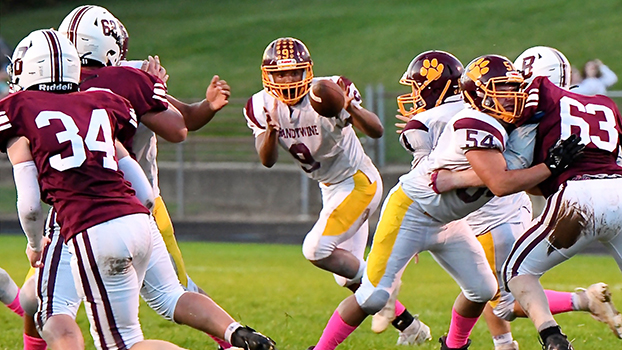 The senior tailback overcame a knee injury and tallied 35 carries for 110 yards and two touchdowns to lift the Bobcats to a 12-6 overtime victory over rival Buchanan Friday night at Veterans Memorial Stadium.

“It is amazing,” McCullough said. “This is my last year. I’m so glad that we beat the Buchanan Bucks. They’re our arrivals and I respect them a lot, but, I’m so glad we beat them.”

“It’s one that we’re gonna remember forever, unfortunately,” said Buchanan Coach Mark Frey. “We fought hard on defense all night; I thought they played great. We just couldn’t get really much going on offense.”

On third and eight from the Buchanan 8-yard line in overtime, quarterback Blake Krueger handed the ball off to McCullough, who bounced off would-be tacklers and found his way into the end zone for the game-winning play and etched his name into Brandywine lore in the process.

“It was a 33 cross trap and then they bit on it,” he said. “It was a wide-open gap and I just ran straight through it.”

McCullough, who received the lion’s share of carries after his teammate Michael Palmer suffered an ankle injury in the first quarter, aggravated a knee injury during the game, but was able to keep going.

“My knee has been bothering me, but I’m going to keep pushing through it,” he said. “That’s who I am. I keep playing and don’t stop.”

According to McCullough, there was plenty of energy left in his tank after his 35-carry effort.

“I had a lot left,” he said. “We ran so many conditioners that I could have kept going and going.”

“[Ivory] is just a great kid,” said Brandywine Coach Mike Nate. “He has been in the weight room since seventh grade. He’s coachable and does everything that we ask him to.”

With the game knotted up at 0-0 with 4:41 remaining, McCullough punched in a 5-yard touchdown to cap a 94-yard scoring drive to give Brandywine a 6-0 lead.

After spinning its wheels for most of the game, the Buchanan offense was finally able to make plays of its own. Taking over at the Brandywine 40-yard line after special teams blocked a punt with less than 45 seconds remaining, Bucks quarterback Connor LeGault connected with Dillon Oatsvall for a 35-yard gain before finding Jack Ruth for a 5-yard touchdown pass to tie the game at six with 13.5 seconds remaining in the game.

Before Logan Grwinski could fire in the go-ahead extra point, his kick was blocked by Brandywine, thus forcing overtime. In overtime, the Bucks committed their fourth fumble of the game on third and eight, which was then recovered by the Bobcats. McCullough found the end zone for Brandywine moments later.

“We sent an all-out block there to get the ball and we did,” Frey said. “We called a little misdirection trick play that got us down [to the 5-yard line]. We scored on the next play and it was a great play. “We’ve gotta execute our extra points better, but that’s how it goes sometimes.”

The Bucks’ offense, which entered Friday averaging 12.7 points per game, found tough sledding against a Bobcats’ defense that came into the game, allowing 41.2 points per game. Brandywine outgained Buchanan 231-100 in total offense — including a 179-7 edge in rushing yards — and ran 76 plays to Buchanan’s 37.

“We shut them down across the board,” Nate said. “We knew why they were gonna throw and that when they went to one running back [in the backfield] that they were going to run, and that’s the pattern they were running. I had about 10 or 15 pages of plays of theirs that we went over in practice. We came to play, and that’s what we did. Our kids busted their butts to win that game.”

Krueger completed 2-of-5 passes for 16 yards. Palmer, who left the game in the first half with an ankle injury before returning in the second half, had 15 carries for 60 yards.

Buchanan’s LeGault finished 6-of-17 for 93 yards and one touchdown pass. He tallied 10 carries on the ground for minus-two yards after being under duress the entire game.

Ruth led Buchanan in tackles with 9.5, while Otswall had 8.5 tackles and a half-sack. Ryder Anderson was responsible for the other half sack.

“I thought our defense played outstanding all night long,” Frey said. “I think we had a great game plan. We were physical. You just don’t want [Brandywine] on the field that long and we got tired.”

“We need to beat Berrien Springs,” McCullough said. “We try to go 1-0 every week. The week after that, we have to beat Benton Harbor. We have to keep playing like this.”