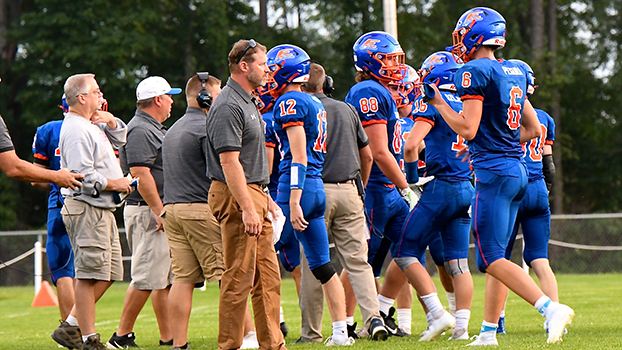 OTSEGO — Visiting Edwardsburg made short work out of Otsego on a very special night for long-time Eddies coach Kevin Bartz.

In a contest that was decided after one quarter, Edwardsburg remained undefeated with a 64-8 win over the Bulldogs. The win improved the Eddies to 7-0 overall and 6-0 in the Wolverine Conference.

It was also win No. 200 for Bartz in his career. He becomes only the fifth coach in southwest Michigan to achieve that milestone.

Edwardsburg put up 22 points in the opening quarter and never looked back. The Eddies added 21 points in the second quarter to open up a 43-0 halftime advantage. The second half was played with a running clock.

The Eddies finished the night with 545 yards of total offense, including 484 on the ground.

Jacob Walker led the rushing attack with 97 yards on three carries and a pair of touchdowns. Zach Bartz, who shared quarterback duties with Jacob Pegura, added 68 yards on three totes and a score. Pegura ran for 39 yards on five carries and scored twice, while he was 3-for-3 for 61 yards through the air.

Defensively, Edwardsburg only allowed 150 yards of total offense. The Bulldogs rushed for 117 yards.