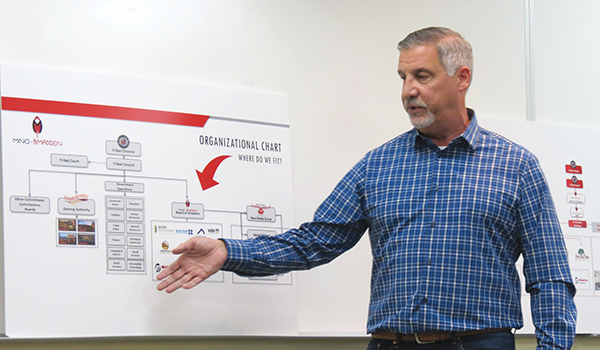 DOWAGIAC – At the most recent meeting of the Dowagiac Rotary Club, the entire club was informed first-hand of exactly how much the Pokagon Band of Potawatomi Indians does for its community beyond the casino.

Julio Martinez, CEO of Mno-Bmadsen, spoke to Dowagiac Rotary Club Thursday, Oct. 7 about the non-gaming investment arm of the Pokagon Band of Potawatomi, based in Dowagiac. He informed the club about various projects, investments and visions for the company.

Chartered under the laws of the Pokagon Band, Mno-Bmadsen was formed in 2012 to diversify the tribe’s business interests while maintaining a separation between business and tribal government. Martinez came on board as chief financial officer in 2016, and became CEO in March 2021.

“We buy, hold, grow – notice I didn’t say in there ‘sell,’” he said. “The vision as articulated in our charter is seven generations, which is a long time. We want to build this portfolio for the future generations of tribal citizens, independent of the gaming.”

Roughly translated, “Mno-Bmadsen” is the Pokagon phrase for “the good path.” “Mno” means “good,” and “Bmadsen” is an abbreviation of the word “Bmadzewen,” which means “way of living,” according to the company.

Subsidiaries of Mno-Bmadsen include construction, manufacturing and professional services, including architecture, engineering, land-use planning, environmental mitigation and mechanical contracting. They work within the Pokagon community to provide services to the commercial, government and tribal markets.

“The community for the Pokagon is larger than Dowagiac,” Martinez said. “The tribe is headquartered here, but the ancestral land goes all over. … You’ll see these investments start to push in that direction.”

In September, the company branched out into a new market with the redevelopment of Hotel Elkhart in Elkhart. Mno-Bmadsen subsidiary Red Tail Properties, a retail investment firm, was a partner in the $23 million renovations of the hotel, which is part of Hilton’s Tapestry Collection.

Martinez was invited to speak to the group by Rotarian John Seculoff.

“The tribe is very involved in our community, in our daily lives, and we may not know how involved they are,” Seculoff said. “That was kind of the point of bringing him here today.”

Rotarian Larry Crandall reflected on how far the Pokagon Band has come since its federal recognition in 1994. He recalled how Scott Winchester, a graduate of Dowagiac Union High School and current employee of Mno-Bmadsen subsidiary Seven Generations Architecture and Engineering, was the lead architect of Dowagiac Middle School.

“There’s kind of a misconception that the Pokagon band, or any other Native American band, is all about gambling. It is so far from the truth,” Crandall said. “I’ll say this about the Pokagon band, they are the most benevolent Native American band I have ever seen. They give back to their communities, they get involved. Money is given back to the schools. … It’s just amazing to me what has happened.”