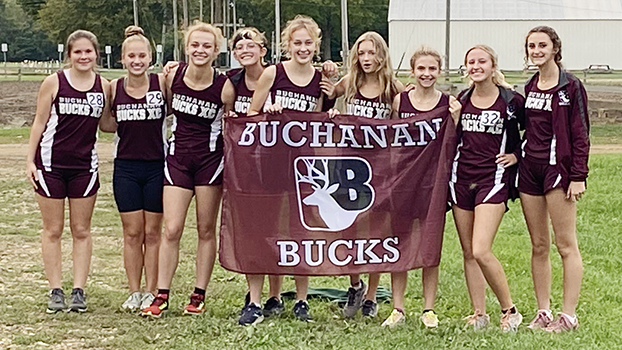 Bridgman edged the Bucks 34-40 at the jamboree, but by winning the previous two jamborees, Buchanan took home the team championship.

The Bucks also had the individual champion as Madeline Young ran a time of 20:58 to easily outdistance runner-up Arie Hackett, of Bridgman, who finished with a time of 21:23.

Brandywine’s Allison Lauri earned first-team all-conference honors with her third-place finish. She ran a time of 21:43.

Berrien Springs was the boy’s champion as team members easily won the jamboree with 27 points. Bridgman was second with 46 and South Haven third with 48.

The Bucks’ Walker Barz finished third overall to earn first-team all-conference honors with his time of 17:49.

Brandywine’s top finisher was Micah Colby, who ran a time of 20:50 to place 18th.

Buchanan will compete in the Portage Invitational Saturday.

The Vikings were swept by host Vicksburg in a Wolverine Conference meet Tuesday.

Aiden Krueger led the Vikings with a time of 18:13 and a third-place finish.

Kierstyn Thompson was the first Niles runner across the finish line as she was sixth overall with her time of 22:33.

Niles will be competing in the Portage Invitational Saturday.