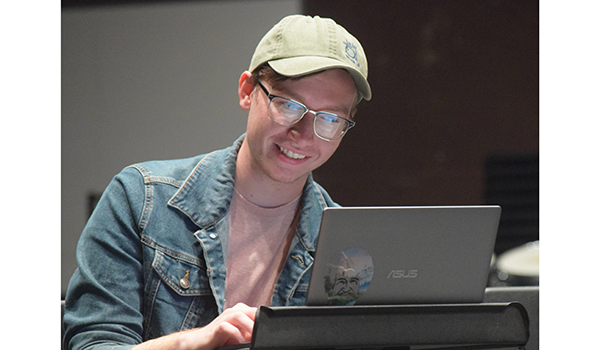 On Oct. 29, the school will host a table read before a live audience at 7:30 p.m. The show will be released on YouTube and on SMC Performing Arts’ Facebook page the next day. The show is a horror-comedy titled “Trouble in Paradise.”

Produced and directed by Marcus Roll, SMC’s manager of theatre operations and applied performing arts, “Trouble in Paradise” is another original script by Branden Pompey, assistant director of campus life/clubs and activities, and an SMC alumnus with a Grand Valley State University theatre degree.

Roll compared the play to “Invasion of the Body Snatchers” meets “Wedding Crashers.”

“You need the comedy to tie everything together and make the story come alive,” Roll said. “It falls into that combination, like ‘The Twilight Zone’ or ‘Scooby Doo.’”

“It’s set on a private island and follows a high-profile wedding between a Hollywood A-lister and a Congressman from Florida, whose father is U.S. President,” Pompey said. “They go a couple of days before the ceremony to get everything set up and to have time to rest and relax, but slowly come to find out that people brought to the island aren’t necessarily acting like themselves.”

Like a radio serial, there will be breaks in the story to go to commercial messages.

“We might throw an ad in there for starting collegiate sports at SMC,” Roll said, “because it’s set modern, where [‘Terror on Dewey Lake’] was set in the ’60s. Then we’ll go to a commercial song, so our actors will provide music. We’re planning four commercials.”

“I waited as long as I could to decide what I wanted to do this fall,” Roll said of the hybrid of radio live on stage in the theatre of the Dale A. Lyons Building on SMC’s Dowagiac campus. “My original plan was to do a dinner-theatre-style cabaret variety show with tables on stage and appetizers, but not knowing where COVID would be in terms of masks and audience restrictions, I came up with the idea of a live performance table read. Actors aren’t required to memorize and block it. The great thing about [this format] is the shorter rehearsal process. They’ll be on stage at tables, reading the script, with some lighting effects. The audience will be dispersed.”

“This type of show is written with just audio in mind. It’s not conceived as a stage play,” Roll added.  “Dialogue is written to account for that. Calling characters by name more frequently than you would need to if they were responding to someone in person that they can see.”

The radio play is free and open to the public. Donations will be accepted to support SMC Performing Arts. There will be no tickets, and seating is first-come, first-served.