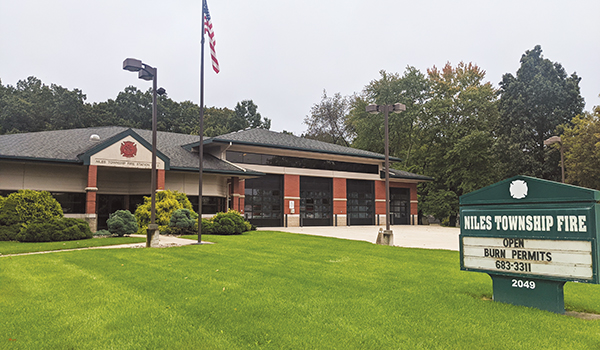 NILES TOWNSHIP — A local fire station will be receiving upgrades that will boost energy efficiency while saving money in the process.

“There were things we needed to have replaced at the [South] station electricity-wise, including sodium lighting,” said Treasurer Jim Ringler. “[Fire Chief Tim Jesswein] and I started talking with [American Electric Power] about the cost of replacing a lot of this stuff and they said we might want to look into replacing all of it with LED lighting.”

Light-emitting diode (LED) light bulbs are energy efficient and use at least 75 percent less energy and last up to 25 times longer than incandescent lighting, according to the U.S. Department of Energy. Because of this, there is a decrease in power costs. Money and energy are also saved in maintenance and replacement costs due to the long LED lifespan.

ARI Energy and Lighting, out of Granger, was approved by the board to take on the project for a cost of $16,130.

According to Ringler, the project will net the township an annual energy and maintenance savings totaling $5,830. In 2.77 years, the township’s savings will have covered the project’s cost.

“Our payback period is 2.77 years,” Ringler said. “After 2.77 years, you start going the other way where after paying the cost, the return is now in your statement. If you look at it over a five-year period, at the end of five years, we will have saved $6,752.96, and that’s based on today’s electric cost.”

In other business, the board unanimously voted to demolish the property at 1117 Lawndale and approved a bid for its demolition.

The property, which experienced an electrical fire, has been in disarray for many years, according to Clerk Terry Eull.

Property owners Steven and Tracie Ferenczi received an Order to Raze from the township in June after it was declared a dangerous building and were ordered to raze the building by no later than Sept. 17. Because no action took place by the deadline, the township will see to it that the property is demolished.

“The building department that worked with the owners on this house for about eight years with the continuing promise that they were going to do something and as of today, nothing has happened,” Eull said. “The neighbors have been putting up with this for that period of time. They have been given ample time and the house has been declared a dangerous building and perhaps beyond repair.”

Cross Excavating & Demolition of Dowagiac was chosen by board members to carry out the demolition for $15,000. According to Eull, the Ferenczis will be billed for the demolition, and if they do not pay, the money will be added to their winter tax bill. Supervisor Jim Stover said that if they still decided not to pay, the Berrien County Treasurer would step in and handle the situation and that the township would not foot the bill.

“This is similar to what happens with any of our other special assessments,” Eull said.

Tracie Ferenczi addressed the board of trustees regarding the property, which is the house she grew up in. The couple was approved for a loan to purchase the house but never received the loan. Eventually, the couple was able to obtain the house but the financial toll of the situation left them unable to make improvements to the household.

According to Ferenczi, the couple is living with her mother and does not currently live at the 1117 Lawndale property.

“I just wanted to explain my situation and why we are in this situation,” she said. “It has been embarrassing. I would rather the front part of my house not be taken off because I feel like I could get that fixed, but I have to leave it in your hands as what you think because I understand I did raise five children there. My house was the house that all the kids in the neighborhood came to watch, so I understand the safety purposes of this decision.”