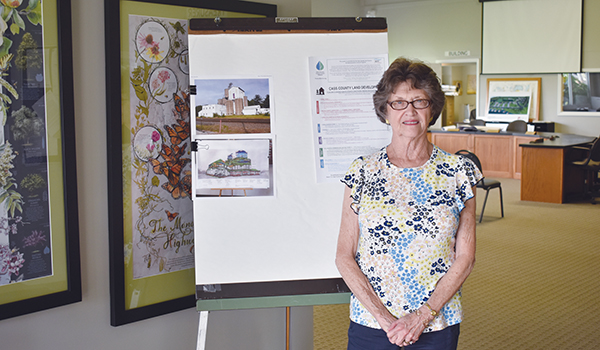 EDWARDSBURG — One area organization is hoping residents will lift a paddle later this month to support an ongoing community beautification project.

The Edwardsburg Uptown Improvement Association will host a quarter paddle auction from 1 to 4 p.m. Oct. 16 at the American Legion, 25751 US-12, Edwardsburg, with doors opening at 12:30 p.m. The event will host both a paddle auction, featuring auctioneer Gordon Carr, and a silent auction featuring baskets, jewelry, decorative items and Halloween décor. Tickets to the event are $5 and can be purchased at Ontwa Township Hall, Edwardsburg Village Hall, from a UIA member or at the door on the day of the event. Food and refreshments will be available for purchase at the event, as well.

“We’ve had a couple of paddle auctions before, and the UIA has always used them to fundraise for different things in the community,” said event organizer Roseann Marchetti. “In the past, the paddle auctions have gone for the All Aboard project, which improved the railway terrain, and the snowflakes and Christmas lights at the library.”

All proceeds from this year’s event will support the All Aboard Mural Project, which will add a mural depicting a colorful sky, train, and local landmarks and business onto a grain mill located at the corner of M-62 and Elkhart Road. Once completed, the mural, painted by local muralist Chris Stackowicz, is poised to be one of the largest murals in the state of Michigan.

“It will add a great deal of interest to the community,” Marchetti said of the project. “People will drive here just to see it, and everyone in the community has an opportunity to be a part of it.”

The mural, which is expected to be completed by next spring, is an extension of the recently completed All Aboard Project, a grant-funded program that brought flowers, trees and landscaping along the railroad tracks on M-62.

The total cost of the mural will be more than $120,000, and Marchetti said the village gets closer to reaching its goal each day. Project organizers are still actively fundraising and seeking grants for the mural, and Marchetti hopes the UIA paddle auction will provide a significant boost to the project’s funding.

“We make a little bit of progress every day,” Marchetti said.

Marchetti said she would encourage community members to attend the auction not only to support a good cause but to have an afternoon of fast-talking fun.

“Aside from the fact that it’s a worthwhile project, it’s a fun time as well,” Marchetti said. “It’s really a lot of fun. We have the nicest, highest-quality items, and we work really hard to present the best items that people really want.”