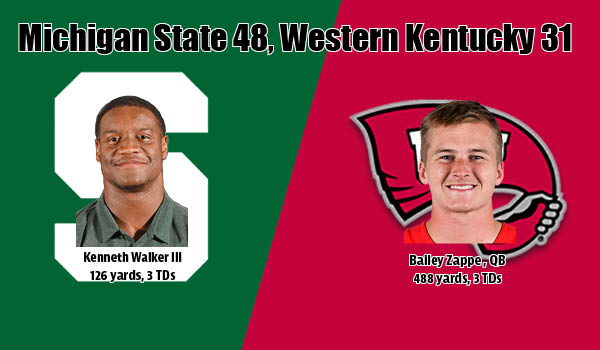 EAST LANSING — Michigan State scored six touchdowns in the first half to open up a 26-point lead and put up more than 500 yards in total offense en route to a 48-31 win over Western Kentucky in front of 70,075 fans at Spartan Stadium Saturday night.

Junior running back Kenneth Walker III had 24 carries for 126 yards and scored three touchdowns, while redshirt sophomore quarterback Payton Thorne completed 20-of-30 passes for a career-high 327 yards and one touchdown pass, in addition to seven carries for 31 yards, including a 13-yard touchdown run. Redshirt junior wide receiver Jayden Reed caught four passes for 127 yards and one touchdown and also returned a punt 88 yards for a score, while redshirt junior receiver Jalen Nailor had eight catches for a career-high 128 yards.

After the Spartan defense forced a three-and-out to start the game, Reed returned the ensuing punt 88 yards for a touchdown, quickly putting MSU on top, 7-0. It marked the second straight punt return for a touchdown for Reed, who returned a punt 62 yards for a score against Nebraska in the fourth quarter.

Following another WKU three-and-out, the Spartans took their first offensive possession 80 yards on seven plays for a score, capped by a 5-yard touchdown run by Walker.

The Hilltoppers got on the board with a field goal at the 5:04 mark in the first quarter, but the Spartans responded with another touchdown drive as Thorne connected with Reed on a 46-yard touchdown pass with 3:54 left in the first.

WKU scored its first touchdown of the game on its next series, cutting the Spartan lead to 21-10 at the 2:57 mark, and added a field goal early in the second quarter to make it 21-13 in favor of MSU.

Walker scored two more rushing touchdowns in the second quarter, from 5 and 3 yards out, and Thorne rushed for a 12-yard touchdown right before the half to give MSU a 42-16 halftime lead. It marked the most points by MSU in the first half since Sept. 27, 2014 vs. Wyoming (42 points).

On WKU’s first series of the second half, the Spartans held the Hilltoppers out of the end zone on a fourth-and-goal play from the 20, but MSU had to take over on its own 1-yard line after a 19-yard pass. MSU then drove 96 yards on 14 plays and took 5:49 off the clock as Matt Coghlin made a 21-yard field goal with 43 seconds left in the third.

Bailey Zappe found Jerreth Stearns in the end zone with 13:13 left in the fourth quarter, and the Hilltoppers converted the 2-point attempt to trim the Spartan advantage to 45-24. Zappe finished the game 46-of-64 passing for 488 yards and three touchdowns.

The Spartans took over with just over eight minutes left in the game and 3:38 on a 12-play, 72-yard drive that was capped by a 20-yard field goal from Coghlin, giving MSU a 48-31 lead.

Michigan State returns to action Saturday, to face Rutgers in Piscataway, New Jersey, at noon. The game will be televised on the Big Ten Network.