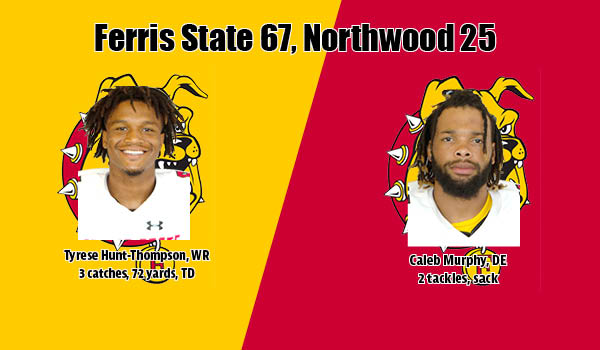 BIG RAPIDS — The second-ranked Ferris State Bulldogs got a record-breaking performance as FSU improved to 5-0 overall this year with a decisive 67-25 triumph on the road over the Northwood Timberwolves on Saturday afternoon in Midland.

FSU sophomore quarterback Mylik Mitchell threw for a school all-time best 508 yards passing along with six touchdowns in a 29-of-39 performance, helping FSU generate 693 yards of total offense in the victory.

After NU cut the margin to 6-3 on a 45-yard field goal from Max Gonos, the Bulldogs pushed the lead to 12-3 when Mitchell found slot receiver Emari O’Brien on a 36-yard scoring strike. It was O’Brien’s first TD catch as a Bulldog.

The Timberwolves kept the game close early thanks to special teams as they took advantage of a short field following a blocked punt and trimmed the deficit to 12-10 on Ty Cox’s eight-yard throw to John Hall early in the second frame.

However, Mitchell and the Bulldog offense responded quickly, moving 59 yards in only three plays with the signal-caller finding Tyrese Hunt-Thompson, of Cassopolis, on a 49-yard scoring throw to make it 19-10 with 12:33 left in the first half.

The lead was cut again though on the ensuing play as Kentrell Ware ran the kickoff back 100 yards for a score to pull Northwood within 19-17 in the second.

However, from there is was all Bulldogs as Ferris State’s Tyler Minor scored on a 39-yard run with Jeremy Burrell later adding a four-yard run to make it 32-17 midway thru the frame.

Ferris State added a 24-yard scoring throw from Mitchell to slot receiver Marcus Taylor with 5:27 left in the half as the score stood in FSU’s favor at 39-17 at the break.

In the third quarter, the Bulldogs scored twice with Mitchell finding Taylor again on a nine-yard throw followed by a seven-yard scoring completion to junior receiver Xavier Wade. His TD gave the Bulldogs a 53-17 lead after three quarters.

Northwood scored its final points of the day with 14:56 to play when Jacob Baldwin hooked up with Shamarr Wright on an 11-yard scoring throw.

The Bulldogs later added two more touchdowns with Minor hauling in a nine-yard throw from Mitchell with 10 minutes remaining and then scoring himself on a three-yard run with 3:19 to go to account for the final margin.

Ferris State had 29 first downs in the game and the Bulldog defense limited the Timberwolves to only 266 total yards, including only 71 yards rushing.

Minor ran for a game-high 131 yards on 13 carries with two scores while CJ Jefferson caught a game-high seven throws for 130 yards for the Bulldogs. Wade had six grabs for 104 yards and Taylor caught six balls for 92 yards.

The Bulldog defense was paced by senior linebacker Liam Daly, who finished with seven stops overall. Former Dowagiac standout Caleb Murphy had two tackles for loss and a sack.

The win was FSU’s 33rd-straight regular-season victory dating back to 2017 and FSU has now also won 18 consecutive road contests overall.

The Bulldogs will have a bye week before returning to action with a potential showdown of nationally top 10-ranked teams in the Anchor-Bone Classic against archrival Grand Valley State on Saturday, Oct. 16, at 7 p.m. (ET) at Lubbers Stadium in Allendale.