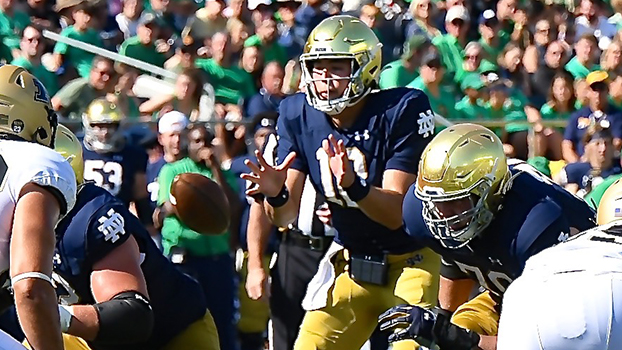 Notre Dame quarterback Drew Pyne, seen here against Purdue, came off the bench in the second half and tried to rally the Fighting Irish against Cincinnati. (Leader file photo)

SOUTH BEND — Fighting Irish Coach Brian Kelly and team were not able to get the win over his former school at Notre Dame Stadium Saturday.

Coming off of a 41-13 win over Wisconsin last week, the ninth-ranked Fighting Irish (4-1) are continuing to look for answers after a 24-13 home loss to Cincinnati.

On the opening drive of the game, Jack Coan had a red zone interception by Cincinnati’s Ahmad Gardner. Notre Dame’s other two possessions in the first quarter ended in punts.

With their first drive in the second quarter, Tyler Buchner was hit as he threw and intercepted by Cincinnati’s Deshawn Pace. Cincinnati took advantage of a short field position and scored the game’s first points with a 1-yard Desmond Ridder pass.

On the following kickoff, Chris Tyree fumbled and Cincinnati recovered at the Fighting Irish 17-yard line. Notre Dame turned the ball over twice within the first four minutes of the second quarter.

“We didn’t take care of the basics today,” Kelly said. “All we needed to do was be efficient at the basics and we weren’t. We turned the football over on offense and special teams. We didn’t coach very well and we didn’t play very well.”

To start the second half, Notre Dame went to back up quarterback Drew Pyne, who played all but one play for the Fighting Irish in final 30 minutes.

“I knew I was coming in the second half, and I knew I needed to come in and execute,” Pyne said. “Cincinnati has a really good defense with really good players and we needed to do a better job of executing.”

The Notre Dame defense brought life to Notre Dame Stadium as Isiah Foskey forced Ridder to fumble. Drew White recovered the fumble and returned the ball to the Bearcat 38.

Kyren Williams put Notre Dame on the board with a 3-yard rushing touchdown, capping a four-play, 38-yard scoring drive late in the third quarter.

On the following drive the Bearcats missed a 37-yard field goal leading to a 32-yard Pyne to Braden Lenzy touchdown. The score capped off an eight-play, 80-yard drive.

At the mid-way point of the fourth quarter, Notre Dame cut Cincinnati’s lead to four, 17-13.

The Bearcats would ice the game with a six-play, 75-yard scoring drive that ending with a 6-yard Ridder rushing touchdown.

“We have to coach the guys that we have and we need to coach to put our players in better positions to succeed,” Kelly said. “We are trying to figure out the quarterback position and we know we can’t keep going into games saying who is next. We have to figure it out and build continuity.”