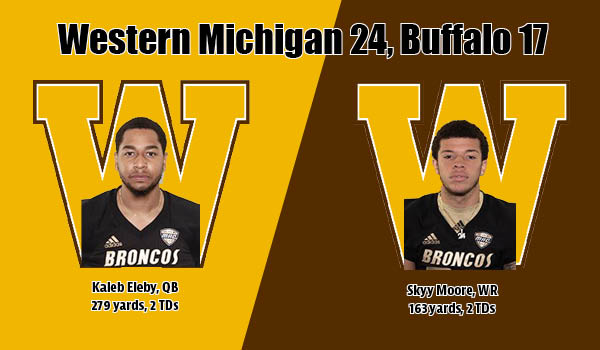 BUFFALO, N.Y. — Western Michigan erupted for 17 points in the fourth quarter to come away with a 24-17 victory at Buffalo in the Mid-American Conference opener for both teams Saturday.

Sophomore wide receiver Skyy Moore had 11 catches for a career-high 163 yards and two touchdowns. Kaleb Eleby had another efficient game, finishing 21-for-33 with 279 yards, two touchdowns and no interceptions. La’Darius Jefferson racked up 97 yards and a touchdown on 23 carries, while Sean Tyler ran for 80 yards on 14 carries.

The Broncos (4-1, 1-0 MAC West) got on the board first when they capped a 16-play, 95-yard drive with a 12-yard connection from Eleby to Moore in the corner of the end zone to make it 7-0 in the first quarter. Buffalo (2-3, 0-1 MAC East) scored on the ensuing possession, and the score remained 7-7 heading into halftime.

The Broncos forced a three and out on the next Buffalo possession, and Eleby found Skyy Moore for a 64-yard touchdown just two plays in to the next drive to put Western Michigan up 17-10. On Buffalo’s next possession, WMU forced another three and out, and followed it up with a methodical drive that ended with a one-yard Jefferson touchdown rush to make it 24-10 with just 2:30 remaining.

Western Michigan returns home on Saturday, for a 3:30 game against Ball State. The game will be aired on ESPNU and the Bronco Radio Network.