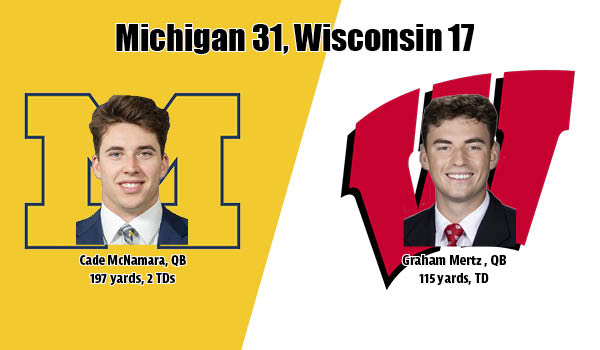 MADISON, Wisc. — The No. 14-ranked University of Michigan football team emerged victorious in its first road test of the fall against Wisconsin 38-17 at Camp Randall Stadium on in a clash of nationally-ranked defenses Saturday.

The Wolverines (5-0, 2-0 Big Ten) won their first game in Madison since the 2001 season and remained undefeated this year, as the nation’s No. 4 scoring defense heading into the weekend lived up to its billing and the offense converted on key opportunities throughout the game.

Michigan scored two touchdowns on drives that featured a combined three fourth-down conversions, and got 10 more points off turnovers that were forced by the Wolverines defense. U-M pulled away from a narrow 13-10 halftime advantage in the second half, as the offense poured in 25 points on 196 yards, while the defense allowed just 71 total yards and seven points.

Though Wisconsin (1-3, 0-2 Big Ten) held Michigan’s fifth-ranked rushing attack to only 112 yards, the Wolverines’ total nearly doubled the cumulative 69 rushing yards the Badgers had allowed through their first three games, including against top-10 opponents Penn State and Notre Dame.

Cade McNamara and the passing game picked up the slack, as he completed 17-of-28 throws for 197 yards and two touchdowns to Cornelius Johnson, while backup quarterback J.J. McCarthy added a 56-yard touchdown pass and a scoring run of his own. David Ojabo led the defensive effort with seven tackles, including 2.5 sacks, while Daxton Hill added an interception. Jake Moody went three-for-three on field goals, including 48- and 47-yard makes.

The two teams’ defenses — Michigan’s ranked No. 4 nationally in scoring defense and Wisconsin’s ranked No. 2 in total defense — flexed their muscles early as both offenses struggled to find the spark for any prolonged pushes in their first two drives.

Michigan’s third drive looked to be going the same way before facing third-and-14 on its side of midfield. McNamara found Roman Wilson for a 12-yard completion and found him again for a six-yard strike to convert the ensuing fourth-and-two to the Wisconsin 34-yard line. McNamara made it three in a row on a flea flicker from Hassan Haskins as McNamara found a streaking Johnson up the left side of the field for a touchdown strike. A Moody extra point gave the Wolverines the game’s first lead, 7-0, with 4:17 remaining in the quarter.

To that point and throughout the rest of the quarter, the defense allowed only three yards of offense to the Badgers. Meanwhile, the Wolverines accumulated 89 yards passing and 39 yards rushing — already more through a single quarter than the Badgers’ nation-leading 23-yard average through three games.

The Wolverines found more fourth-down fortune as the second quarter began. A 43-yard punt by Brad Robbins hit an unaware Wisconsin player and the live ball was recovered by Joey Velazquez in a scrum at the Badgers five-yard line, turning a fourth-and-seven at the UW 48 into a first-and-goal at the Badgers’ five. The stout Wisconsin defense held, but Michigan was able to add three more points via Moody’s leg from 26 yards out for a 10-0 edge with 13:17 remaining in the half.

The two teams traded field goals in the closing minutes of the second quarter — a 34-yard attempt for Wisconsin with 2:32 remaining and a 47-yard boom from Moody with 27 seconds to go — but Wisconsin broke through for its first touchdown of the game on an 18-yard pass with seven seconds left to cap a three-play, 63-yard drive to cut Michigan’s halftime lead to 13-10.

The Wolverine defense set the tone early in the second half with a forced three-and-out by the Wisconsin offense — which lost its quarterback Graham Mertz to injury on the last play of the drive — and the offensive followed suit with an 11-play, 59-yard scoring drive that chewed up 5:29. The Wolverines converted on a fourth-and-one at midfield on a Haskins rush, converted a third-and-10 with a 38-yard connection between McNamara and Wilson, and punched in another fourth-and-one situation at the goal line as backup quarterback McCarthy broke through on a quarterback keeper to give Michigan a 20-10 lead with 8:26 left in the quarter.

Michigan continued to hold the Badgers at bay defensively — and ate up clock offensively — through the end of the quarter and into the beginning of the fourth, when Ojabo sacked Wisconsin backup quarterback Chase Wolf and forced a fumble that was recovered by Christopher Hinton at the Wisconsin 33. Four plays later, Moody hit his longest field goal of the day from 48 yards out to stretch Michigan’s lead to 23-10 with 12:21 remaining in the game.

With 12:20 on the clock in the Badger’s next play from scrimmage, Hill picked off Wolf at the UW 35-yard line to set up another Wolverines scoring drive. Facing third-and-eight on the Wisconsin 13, McNamara found Johnson for the second time on the afternoon — and again on the 2-point conversion — as Michigan took a commanding 31-10 lead with 9:34 remaining.

The Wolverines tacked on to the margin with a 56-yard strike from McCarthy up the right sideline to Daylen Baldwin with just over five minutes remaining, though Wisconsin answered with a score late through the air.

Michigan will take to the road again next Saturday with a matchup against Nebraska at Memorial Stadium. Kickoff is scheduled for 7:30 p.m., and the game will be broadcast live on ABC.