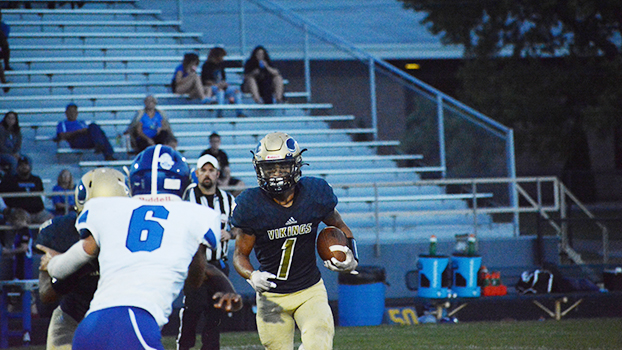 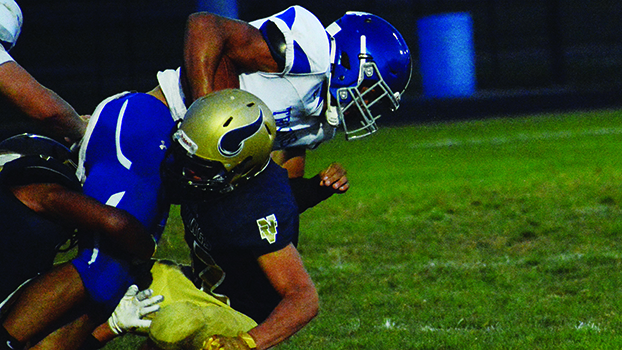 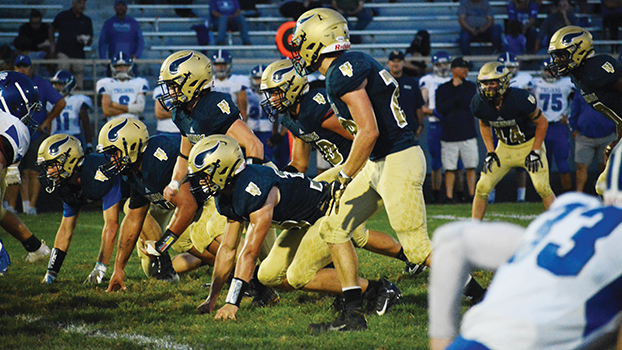 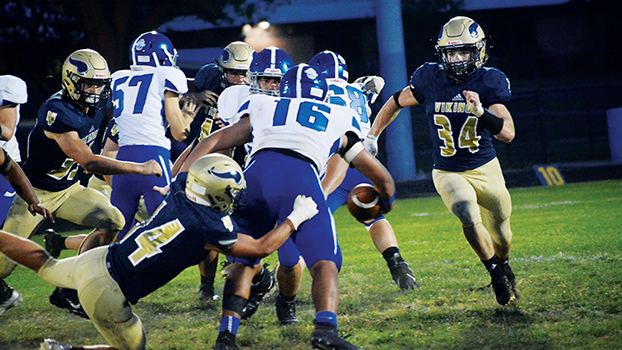 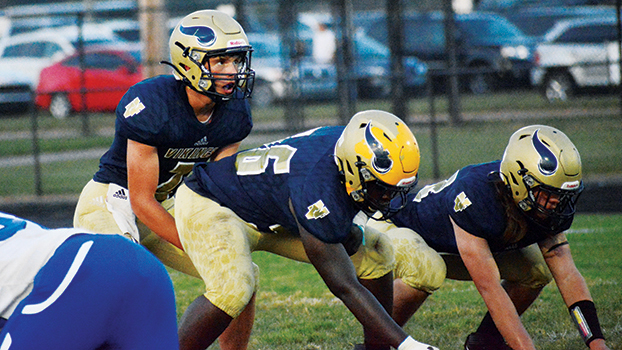 NILES — The Niles football team was hoping to deliver a win to the thousands of Vikings fans in attendance for Friday’s homecoming game.

Unfortunately for Niles, the team was its own worst enemy.

Miscues on offense cost the Vikings in a 14-2 Wolverine Conference loss to Plainwell.

The Vikings’ defense limited Plainwell to just 183 total yards, but the offense committed four turnovers compared to Plainwell’s one. Niles also turned the ball over on downs in three of its four fourth-down attempts.

“Defensively, I thought we played really well,” Niles Coach Scot Shaw said. “Offensively, we played well at times and we moved the ball, but man, we just shot ourselves in the foot with fumbles and turnovers and that. I don’t know how many times we were down in the red zone and didn’t score. We just can’t make those mistakes.”

Daeshawn Dixon-Schuhmacher finished with 31 carries for 110 yards and one touchdown run.

Niles’ lone points on the night came via safety after Landon Dixon-Schuhmacher was called for a fourth quarter grounding penalty in the end zone.

“It was nice seeing our kids stiffen up, especially when our backs were against the wall,” said Plainwell Head Coach Chris Taylor. “They had quite a few scoring opportunities and we came up with some fumbles, big plays and some stops down there in the red zone, so that was key for us.”

Niles had a series of promising drives that got wiped out by mistakes. After forcing a three-and-out in the second quarter, a muffed punt from Plainwell led to Niles taking over on offense at the Trojan 3-yard line with a chance to tie the game. On Niles ensuing play, the ball was ripped away by Daeshawn Dixon-Schuhmacher, who then raced the other way to the Niles 45.

When the team’s relative youth is brought up in discussion, Shaw does not believe that applies to his players.

“That’s two weeks in a row that I thought we were better than the team that beat us.”

Julian Means-Flewellen led the Vikings with 105 yards on 22 carries. Sophomore quarterback Talon Brawley completed 2 of 11 passes for 32 yards and an interception and carried the ball 11 times for 30 yards and a fumble.

“He’s doing okay,” Shaw said. “He’s got a lot of responsibility and for never having to run this type of offense, he’s doing okay. The kids that are doing it in middle school and stuff like that are going to have an advantage because they’ve done it, but he’s coming in cold. He has gotten a lot better since we first met in the summer and he’ll get there.”

The arts of pitching the ball and receiving the ball while not turning it over are aspects of the veer offense the Vikings will look to improve on.

“With a lot of those pitches, we have to share the responsibility,” Shaw said. “The pitch man is not in phase, Talon is pitching it to a guy who’s not in phase and the guy is not catching it because he’s not in phase. So, it’s kind of a dual responsibility there that they share. They both have to be on the same page.”

Kimoni McLean led Niles with four tackles and Dane Asmus tallied an interception. Freshman Sam Rucker made plays on both sides of the game for Niles. He finished with three tackles — including two for loss — and added one catch for 24 yards and three carries for 10 yards.

“He’s electric for sure,” Shaw said. “He’s one of those kids that just has that magic. Every time he gets his hands on the ball, he can do something with it, he can make something happen. The best thing about him is he’s a freshman’ we’ve got him for three more years. He plays hard and he still plays like a freshman at times but that’s okay.

“He’s not starting because he’s all we got, he would start on any of my teams that I’ve had in the past because he’s that good of an athlete.”

Niles’ record sits at 3-3 on the season. The Vikings look to snap their skid against Paw Paw next week.

“We just have to hang with it and not lose faith,” Shaw said. “Just come get the next one, it’s all we can do right now. Record-wise, the best we can be after next week is 4-3. We’ll try for 4-3 all week. We’ll try to work on what shortcomings we see on film tomorrow and we’ll get better. We’ll get better.