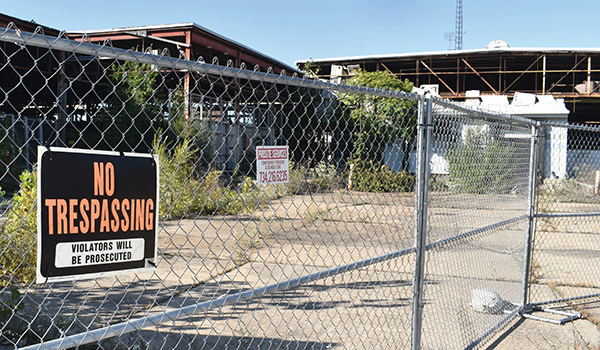 NILES — The property at 901 Howard St. in Niles has gone by many names over the years: “the National Standard property,” the “Heico Building” and, most casually, the “Wayne Street Mess.”

The blighted industrial property that sits on several blocks between Howard and Wayne streets is a shell of what it once was. The former National Standard facility, owned by holding company Heico, has sat abandoned for more than a decade, and is now best known in the city not for being a bustling headquarters, but instead for its crumbling structures, piles of debris and graffiti-laden walls. For years, residents surrounding the property have petitioned for its demolition, calling it a dangerous eyesore, but it seemed like little process was made.

This week, all that changed thanks to a vote by the Niles City Council.

“There should be nothing visible other than grass, but it will be somewhat elevated,” said City Administrator Ric Huff.

Huff expects the demolition to be completed within 90 days. Already this week, loud clanks and booms echoed out from the property, as crews were onsite working on the project.

The demolition is the result of many years of conversations with the property owners, the city and the Michigan Department of Environment, Great Lakes and Energy.

“[The property owner] has had some environmental challenges, and the state has signed off on a plan for the demolition and the capping of that property,” Huff said. “The timing finally came together.”

Over the years, many solutions have been considered for the former National Standard property. In January, the city council approved a system impact study for solar, battery and energy storage to potentially be placed at the site. In March, the council gave unanimous approval to engage Advanced Redevelopment Solutions, a company out of Eagle, Michigan, in a consultation for a City Complex Solar Project, which would allow the city to explore what incentives might be available for developers interested in the property.

Huff believes the solution to cap the property as greenspace will be an improvement for the city.

“It should be a significant improvement for the people who live by or have to walk or drive by it every day,” he said. “It’s obviously an eyesore and a safety hazard, so we are very excited it’s coming down.”

Following Monday’s vote, which was met by a round of applause from the audience and a happy dance from Councilmember Gretchen Bertschy, area residents said they were relieved to hear the “Wayne Street Mess” was finally coming down.

“I’m very excited,” said Niles resident and former councilmember Dan VandenHeede. “Anything is better than what is there.”

An avid runner, VandenHeede often passed by the Howard Street building on his daily route. He said he has always thought the property dangerous and an eyesore that did not reflect well on the city.

“It’s the last thing you want to represent your town,” he said. “I think Niles is so much more than that. It’s not what I want people to remember when they think about our town.”

In January 2020, VandenHeede started the Facebook group Hey Heico! Clean up your Mess in Niles!, a group dedicated to the demolition of the building. The group has more than 300 members, who have attended meetings on the subject and reached out to state, city and Heico officials to have the blighted property removed.

“I like to think that group and the citizens put some pressure on this,” VandenHeede said. “I’m just glad they are finally stepping up and taking responsibility for this mess.”

VandenHeede is not the only one happy to see the property demolished. Captain Don Wise of the Niles Fire Department said he could not be happier to see the building go, believing it a danger to both residents and first responders.

In the last year alone, Wise reported five suspicious fires on the property. Each time one occurred, Wise said the calls were particularly dangerous for fire fighters to respond to due to the building’s collapsing floors, deteriorating structures and other hazards.

“It’s really dangerous to send anybody in due to the risk of entrapment. If the floor further caved in, there is no way you could get out,” he said. “It was not worth even a papercut to go inside that building knowing the condition of it.”

While no injuries have been reported as a result of the fires, Wise said he is relieved about the property becoming greenspace, as he has often worried about homeless persons or children entering the property and becoming trapped.

“That is one where you lie awake at night not being able to sleep because you are wondering what would happen in different situations that may arise in that building,” he said.

Huff said he is aware residents have been hoping to see the property demolished for a long time and is glad that it is finally happening.

“These things never happen as quickly as everyone would like them to because there a lot of moving parts,” he said. “What [residents] have been asking for and hoping would happen looks like it is going to happen. Those are really great things.”

A Heico representative could not be reached for comment as of publication.