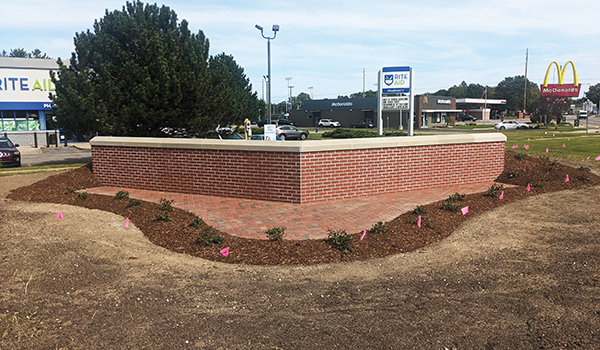 Crandall provided an update to club members during its Thursday meeting at Front Street Crossing. The brick sign — located on the piece of land bordering the intersection of M-51 and M-62 in front of Rite Aid in Dowagiac — will read “Welcome to Dowagiac” and will feature the Rotary Club logo and special message bricks purchased by
donors.

“The bottom line is that we’re very close [to completion],” Crandall said. “I appreciate all of the support during this process.”

According to Crandall, the brick pavers and irrigation system have been installed as well as the plantings, grass seed and topsoil. The project has progressed while experiencing some roadblocks along the way.

“We’ve had some obstacles, and we had a couple just this week getting electricity hooked up,” Crandall said. “We have to wait for Midwest Energy because the city no longer does electricity. That’s just a bump in the road that we’re working on.”

The ongoing pandemic has significantly impacted the supply of building materials. Because of this, Crandall said the lettering for the sign has yet to arrive.

“Our lettering is one of the victims of the supply chain,” he said. “We’re still waiting for the letters. It will probably be about three weeks until the lettering arrives.”

The project, which has been in the works for roughly three years and finally broke ground in July, was implemented to commemorate the 100-year anniversary of the Dowagiac Rotary Club, which was founded in 1920. Approval was granted by both the Rotary club’s board of directors and its charitable foundation board to provide the sign. The club then raised the necessary remaining funds through donations and the selling of commemorative bricks that can be purchased by current and past Rotarians, in addition to family members of deceased Rotarians. The organization then engaged the services of engineering firm Wightman for the development of the sign.