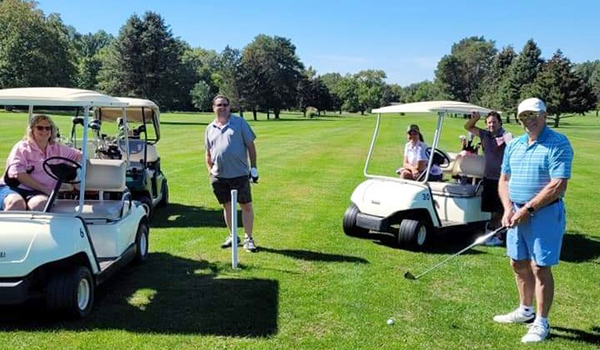 DOWAGIAC — The Dowagiac Elks lodge used its greens to raise greenbacks for a cause last weekend.

“We are totally ecstatic,” said Elks inner guard Susie Gendron. “We’re so thankful for the support and glad we get to give it back to the community.”

Thirty-nine golfers participated in this year’s tournament, which featured a “four-man scramble” format where teams of four players competed against one another. In this format, each team’s players hit from the tee box, then the team members choose the best of the four shots for the next shot.

The attendee with the best score at the outing does not win, unlike most golf tournaments. Winners were instead chosen at random by picking from a selection of cards.

“It was great,” Gendron said. “We had a beautiful day. A lot of fun was had.”

Students interested in applying for the scholarships can apply online at elks.org/scholars/scholarships/mvs.cfm.

Since 1993, the Elks National Foundation has awarded more than $3 million in college scholarships to at least 800 high school seniors.

Silent auction and business sponsorships included, the event raised more than $8,000 in 2019.

“Honor Credit Union supplied us with gift bags,” she said. “Businesses donated financially to the bottom line. We appreciate the support from local businesses. The scholarships are a great way for us to support our youth and give back to the community.”

According to Gendron, The Elks Golf Course plans to remain open through the month of October and early November, weather permitting. The lodge is open to the public from 5 to 8 p.m. Friday nights for dinner.

“Anyone from the community is welcome to join us for food on Friday nights,” she said.

The Guys and Dolls outing is just one of several events the lodge puts on for the community.

Gendron said the lodge is planning its Breakfast with Santa event in December, its Lobster Bash in January and Wild Game Auction in February.

“We’re keeping our fingers crossed that we will be able to host those events,” she said.