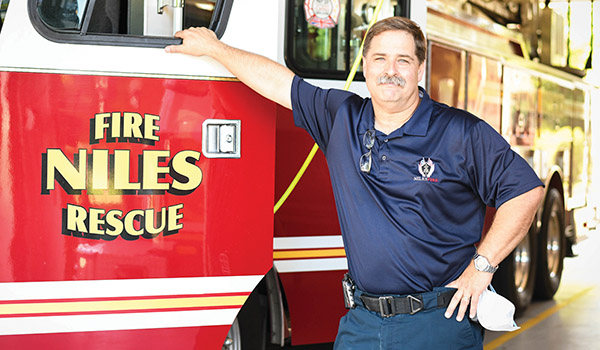 NILES — For years, Larry Lamb, former city of Niles fire chief, watched the Four Flags Apple Festival Grand Parade from the comfort of his front porch, watching as colorful floats rode down the street in front of him.

While he said he believed he had a good view of the parade, this year, he will have the best seat in the house.

Saturday, Lamb will serve as the grand marshal for the Four Flag Apple Festival’s Grand Parade, which kicks off at 1:30 p.m. Containing a multitude of floats from area businesses and organizations, the parade will run through downtown Niles.

“This is a great honor,” Lamb said. “It will be fun to see all the friends and family as we go through the parade route.”

Before retiring last year, Lamb spent 37 years as a firefighter, many as the fire chief in the city of Niles. Currently, he works as a fire inspector for the Michigan Department of Licensing and Regulatory Affairs.

During his time at the Niles Fire Department, Lamb spend time each year at the Apple Festival, providing fire education to area youth.

“Every year, we had the opportunity to not only talk to kids in the city of Niles, but from all over the area,” he said. “It allowed us to impact upwards of 40,000 people — everyone who came through. It also allowed us to bring together fire, police and EMS.”

Though Lamb has decades of memories from the Apple Festival, he said his favorites come from working directly with area youth and their parents.

“There are just so many to choose from,” he said. “There were just so many good times hanging out with all the people. There was fun and laughs, and you got to see people you don’t see very often because a lot of people come to town just for the Apple Festival. My best memories are being out at the festival working public safety.”

This year, Lamb said he is excited to make some new memories as the Grand Parade’s grand marshal.

“Being in the parade is a huge honor, and I was very shocked when I was asked,” he said. “I love the city fold. In my current job, I’m at home, so I don’t get that same comradery, so I miss my Niles community. … It will be cool to ride at the front of the parade and wave at everyone as we go by.”

While the parade is what Lamb is most looking forward to at this weekend’s Apple Festival, he said he hopes to community members both past and current at all of the festival’s various events.

“It’s a great community festival,” he said. “It’s been there so long, it can be kind of a homecoming for some people. Even if they leave [Niles], they come back for the Apple Festival, and that makes it a really great event.”