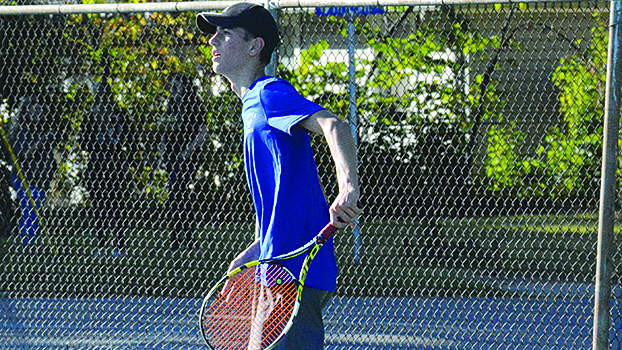 NILES — The Edwardsburg tennis program has been bolstered this season by an athlete from another country.

Marcos Anglada, a foreign exchange student from Spain, concluded his junior varsity season with a victory over Niles in singles play.
Anglada, a junior at the high school, began playing tennis four years ago. Upon arriving in Edwardsburg, he decided to try his hand at competing at the high-school level and made the junior varsity team.
“I had never played competitively before until now,” he said. “Just with friends. I had a few training practices before but nothing like this. I wanted to play a sport, have fun and win matches. People love winning matches. I’ve made new friends, too.”

“We received information that he was coming to town and asked if he could play,” said Edwardsburg junior varsity coach Steve Hurt. “He started a little late because he didn’t get here until the first week of September, and we started the second week in August. His host family contacted us and said he played tennis and would like to play and told him to come on out.”

Anglada is enjoying his American high school experience and felt that trying out for the tennis team would be an organic way to make new friends and meet people.

“It’s been an adventure,” he said. “I came over to a side of the world where I don’t know anyone. I started from zero in terms of making friends and taking new classes.”

The environment may have changed for Anglada, but the feeling of being a high school student remains the same.

“The only thing that feels different is being in another country,” he said. “I don’t feel like I’m different from the other students.”

According to Anglada, his favorite subject in school is history.

“My teacher is very funny,” Anglada said. “I like the geography aspect of it the best.”

Hurt said Anglada finished the junior varsity season with a 2-0 record. If an injury occurs to a member of the varsity tennis team, Anglada could slide into that spot.

He was impressed with Anglada’s performance during his abridged season and enjoyed having him on the team.

“He’s been a great addition to the team,” Hurt said. “We love him. He’s got some good jokes, and he’s a fun kid to have around.”