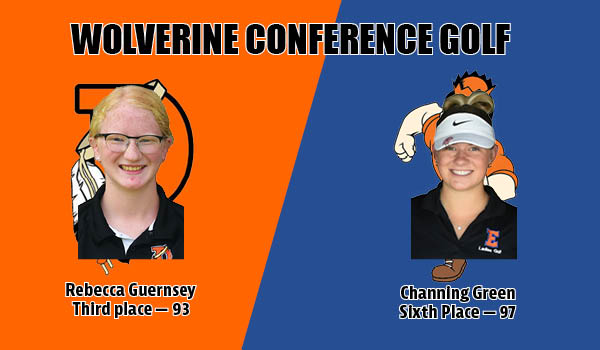 AUGUSTA — There was a shake up in the standings of the Wolverine Conference golf chase following the league tournament at Stonehedge North Tuesday.

Plainwell held on to the overall league championship after going 9-0 in dual matches and winning the conference tournament with a score of 394.

The shake up came from second place on down to fourth place as Dowagiac, which when 8-1 in dual matches, finished fifth at the league tournament with a score of 420. Allegan, grabbed the runner-up spot on Tuesday with a score of 398. The Tigers were third in dual meets with a record of 7-2.

Edwardsburg which finished third at the tournament with a score of 406 also jumped over the Chieftains to finish third overall in the final standings. Dowagiac winds up in fourth place.

“We did not have our best day at conference,” said Dowagiac Coach Bob Turner. “Rebecca [Guernsey] took third and Calley [Ruff] fifth. Carlee [Spagnoli] had a really good day to shoot 115. She has improved a great deal.”

Ranae Jaeger, of Plainwell, was the medalist as she finished with a score of 84. She is also the overall medalist for the conference.

Guernsey and Ruff both earned All-Wolverine Conference honors with their top 10 finishes. Edwardsburg’s Channing Green, who finished sixth on Tuesday, and Chloe Baker, who was ninth, also earned first-team all-conference.

The Eddies’ finish is also the highest in school history according to Coach Steve Wright.

Niles finished ninth overall with a score of 544. The Vikings were led by Trinity Heighway and Eva Van Dyke’s score of 131.