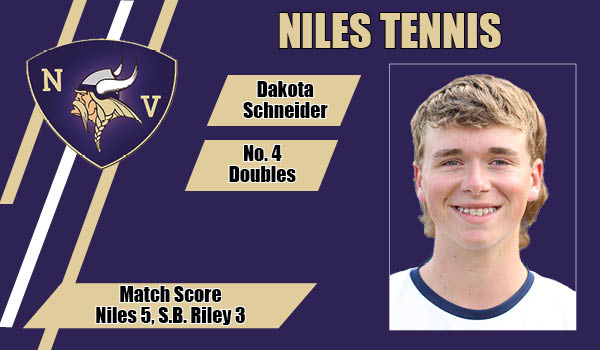 The Vikings split the singles flights and won three out of the four doubles flights to earn the non-conference victory.

Because Indiana uses a different format for its high school matches, including just five flights instead of eight, the two teams went with an abbreviated scoring format.

Winning in singles for the Vikings were Huck Coffee and Ethan Chambliss at No. 1 and No. 4. Coffee defeated Blake Allison 4-0 and 4-0, while Chambliss defeated William Atkins 2-4, 4-1 and 11-9.

Wyatt Mitchell and Aiden Krueger defeated Hunter Kirkpatrick and Brady Burkhart at No. 2 doubles 4-1 and 4-1, while Justin Russo and Jackson Podlin defeated Dylan Merek and Tyler Merek 4-1 and 4-2 at No. 3 doubles.

Niles’ Dakota Schneider and Elias Babler defeated Kenny Almanza and Edgar Franco at No. 4 doubles 4-1 and 4-1.