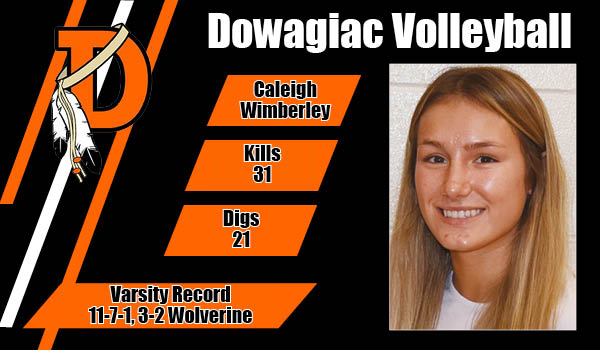 The Chieftains got off to a good start, but were unable to maintain that momentum and wound up going 2-2 on the night.

“We had a nice win against Lakeshore to start the evening and were competitive in our two losses,” Hooley said, “It’s a little disappointing that we couldn’t win at least one of those matches, but we did have our chances.”

Caleigh Wimberley led the Chieftains in both kills (31) and digs (21), while she also had five aces. Riley Stack also put up some big numbers as she finished with 37 assists, 22 kills, eight digs, four aces and two blocks. Megan Davis had 18 kills, 18 digs, three aces and two assists.

Dowagiac also got 38 assists and 10 digs from Brooklyn Smith, 19 digs and five blocks from Abbey Dobberstein and 11 digs from Maggie Weller.

“Caleigh Wimberley had a monster night with Riley Stack turning in a solid evening of play as well,” Hooley said.

Dowagiac is back on the court Thursday night as it travels to Sturgis for a Wolverine Conference match.