Chieftains put it all together against Sturgis 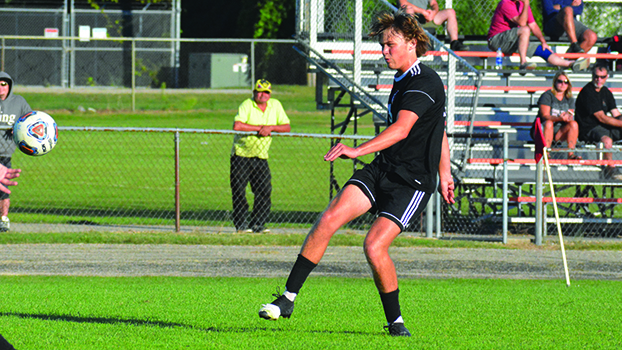 DOWAGIAC — As the state tournament looms in the not too distant future, it is time for the four-time defending Division 3 district champion Dowagiac soccer team to start peaking.

Veteran Chieftain Coach Mike Williams talked about how he needed his team to play a full match. He has been waiting for it to happen pretty much all season.

Monday night against Wolverine Conference foe Sturgis, Williams got what he wanted as the Chieftains dominated the visiting Trojans 7-0.

“We played a full 80 minutes as a team,” he said. “We need to continue this through the rest of the season. It was also good to have our full starting lineup in and a bench that kept up the pressure.”

Dowagiac, 3-3 in Wolverine Conference matches, raced out to a 5-0 halftime lead and never looked back.

Cole Weller picked up a pair of first-half goals, while Isaac Saavedra, Noah Green and Alexx Hernandez also found the back of the net. Chris Mosier picked up the lone assist in the opening 40 minutes of play.

Hernandez scored his second goal off an assist from Saavedra in the second half, while Mosier capped the scoring with a goal.

Dowagiac returns to the pitch Wednesday as it heads to Otsego to take on the Bulldogs in a match scheduled to begin at 6:30 p.m.

The host Eddies dropped a 7-1 decision Plainwell in a battle for first place in the Wolverine Conference.
Both teams came into the match with 4-0-1 records.

Bodi Wegner had the lone goal for Edwardsburg off an assist from Tye Vargo.

The Eddies are back in action Wednesday as they travel to Three Rivers for a conference match, which is slated to begin at 6 p.m.