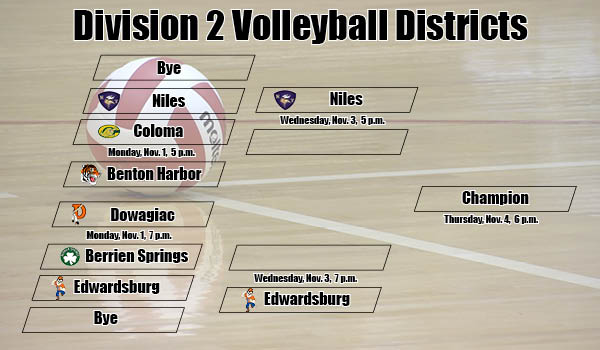 DOWAGIAC — As certain as death and taxes, the Edwardsburg and Niles volleyball teams can be counted on to play in the district finals.

The Eddies have won three consecutive district championships in Division 2, and were the district champions in Class B in 2016. Niles won the 2017 Class B district title, but has faced each other in either the semifinals or finals each of the last three years.

Once again, the pair looks to be on a collision course as the Division 2 District pairings were announced by host school Dowagiac.

As the No. 1 and No. 2 seeds, Niles and Edwardsburg received first-round byes and will play in the semifinals Nov. 3 at Dowagiac Union High School.

The Vikings will get the winner of the Coloma-Benton Harbor opening-round match, which will be played at 5 p.m. on Monday, Nov. 1. Berrien Springs will face host Dowagiac in the second match on Nov. 1 at approximately 7 p.m.

The winner of the Shamrock-Chieftains match will advance to face Edwardsburg in the second semifinal at 7 p.m., Nov. 3. The championship match is scheduled for 6 p.m., Nov. 4