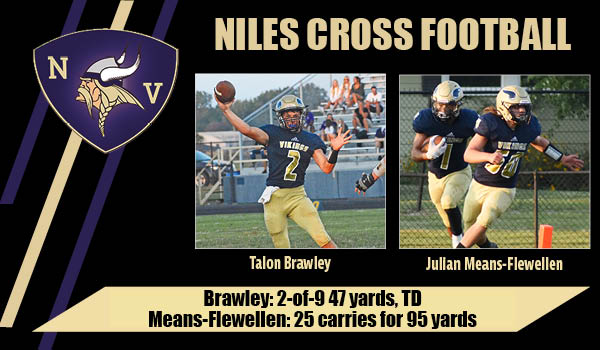 VICKSBURG — Statistics usually tell the story of any game. But on the rarest of occasions, statistics can lie.

Such was the case Friday night in Niles’ 21-14 Wolverine Conference loss to host Vicksburg.

The Vikings ran 79 plays compared to 21 for the Bulldogs. Niles outgained Vicksburg 250 to 57 in total offense. There were no turnovers in the contest.

So how did the Vikings wind up on the wrong end of the score?

Special teams would be the answer to that question as Niles gave up an 81-yard kickoff return to start the game and struggled with the punting game due mainly to the loss of starter Ezra Vance, who sustained a leg injury earlier in the week.

Niles ended up punting three times for an average of 16.7 yards. That allowed Vicksburg to set up its offense with a short field, which the Bulldogs took advantage of to score on a 24-yard pass from Evan Anderson to R.J. Vallier, who had the kickoff return for the touchdown, and a 6-yard run by Bo Skidmore that turned out to be the game-winning score.

Niles (3-2, 2-2 Wolverine) scored in the opening quarter on a Talon Brawley 1-yard run and on a Brawley 27-yard pass to Sam Rucker in the third quarter. The Vikings failed to convert the first 2-point conversion, but Julian Means-Flewellen scored on the conversion run to tie the score at 14-14.

Brawley ended the night 2-of-9 for 47 yards passing. Means-Flewellen had 95 yards rushing on 25 carries, while Brawley added 51 yards on 24 carries.

Defensively for the Vikings, Rucker had three tackles, all of which were sacks.

Niles looks to get back on the winning track Friday night as it hosts Plainwell, which was defeated by Edwardsburg 49-0 in a battle of Wolverine Conference unbeatens for homecoming.