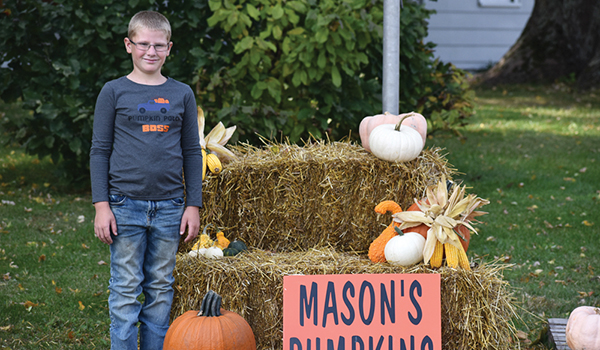 DOWAGIAC — A local elementary schooler’s business venture is nearing its biggest event of the year.

“He’s really excited,” said Mason’s mother, Kristin Ausra. “He’s been working hard. He actually has one of his friends helping this year with picking pumpkins because it’s a big job for someone to be able to do it all.”

The festival will again feature a photo booth by Jessica Krueger Photography and fresh produce from Disterheft Farms. Hidden Acres Safe Haven will be at the event with kitten adoptions and a few other animals, and Sandy Hill Farm will be there with local raw honey. Candy and sweets from Buchanan-based J.KRU Sweets will also be sold at the festival, as well as antiques.

Mason has been in the pumpkin growing business for four years and welcomes the hard work.

“Mason has a work ethic unlike any child and most adults,” Ausra said. “He lives to work. We have to convince him to do other things, to have fun and join sports, because if it was up to him, he would be on the farm. The same amount of 80 to 100 hours that his dad is. He likes to see his product. He likes to be able to give back to the community and he enjoys it.

“[On Monday morning] he woke up at 7 a.m. and realized it was raining. So he ran outside to go move the straw into the barn so it wouldn’t get wet and be unable to be sold for his customers. These are all things that he really does on his own like this without prompting.”

According to Ausra, he has begun to handle the financial side of his business.

“On Sunday night, he sorted all of his money,” she said. “He did all of his accounting that I’ve kind of always done with him up to this point. So he’s really taking ownership as he grows up more and learns about what he wants to do and how.”

To date, Mason’s earnings are being saved for college or a future farm business. While many children his age may use allowance to purchase candy or a trending toy, Mason purchased his first farm vehicle this summer, Ausra said.

“He bought a utility golf cart, and he also purchased a trailer to go with that,” she said. “So now he can drive himself to the back of our property where the pumpkins are this year and can pick them by himself and with his friend’s help. He always washes them and puts them out.”