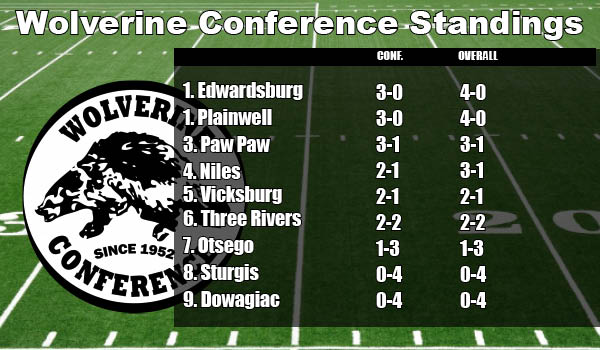 NILES — It may be hard to comprehend, but area high school football teams are at the halfway point of the season when they kick off Friday night.

Edwardsburg leads the way among the teams covered by Leader Publications with a 4-0 record. The Eddies are 3-0 in Wolverine Conference games as they head to Plainwell Friday night to take on the undefeated Trojans.

The Edwardsburg offense has been improving each week and has been firing on all cylinders, outscored its opponents 203-7.

The Eddies’ first-team defense has yet to be score on.

Plainwell is also 3-0 in the Wolverine and 4-0 overall. The Trojans and Eddies have yet to play a common opponent. Plainwell has outscored its opponents 115-34.

Edwardsburg Coach Kevin Bartz likes what he has seen from his team so far, but knows that there is still plenty of work to be done before the postseason arrives.

“As we are reaching the mid-season point, I am pleased with the progress of our team,” he said. “I think the last two weeks we have shown a lot of improvement on both sides of the ball. We also have started to get a little more depth in several positions and are gaining confidence in more and more players and their abilities to perform well in-game situations.”

With the season reaching Week 5, Bartz knows that this is where his team will need to grind it out moving forward.

“Injuries start to occur, bodies are sore, the amount of school work starts to pile up and the kids become fatigued,” he said. “We need to remain focused in practice and not lose the edge. At this time of the year, we should start fine-tuning things and look to add a few new schemes.”

Kickoff Friday is scheduled for 7 p.m.

After losing its first game of the season, Niles bounced back with a come-from-behind victory over Three Rivers last week.

The win was big for the Vikings, who are trying to post their first winning season since 2014.

First-year Coach Scot Shaw is happy with how his team has responded to adversity this season.

“I think we have improved a great deal as the season has progressed, we have had some injuries but have so far been able to compensate,” he said. “I am surprised with how hard they are willing to work, and how they have no fear of what it takes to win.”

Shaw believes that Niles will continue to have success this season if the Vikings continue to do the right things, like work hard in practice and remain focused on their goals.

“If we take care of business every week, then all of the rest will fall into place,” he said.

The Bulldogs are another team that the Vikings have never played in program history,

Vicksburg is 3-1 on the year and 2-1 in the Wolverine Conference after losing to Edwardsburg 49-0 last Friday night. 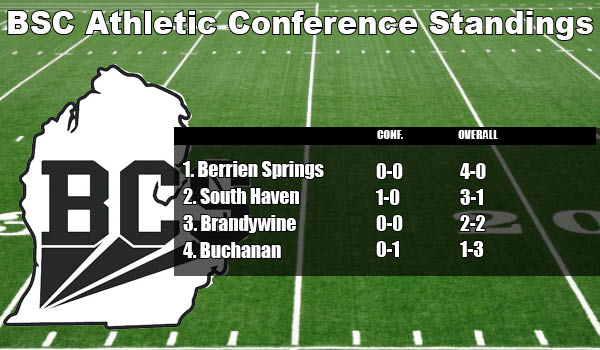 After starting out the season with wins over Centreville and Cassopolis, the Brandywine football team has dropped back-to-back games.

In the Bobcats’ losses, they have been outscored by their opponents 104-54.

Brandywine will try to get back on the winning track, but it will not be easy as it takes on Lawton, which is 4-0 on the year and has outscored its opponents 222-7.

This will be the second meeting all-time between the two schools. The Blue Devils defeated the Bobcats 42-25 last season.

The Blue Devils are coming off a 52-7 win over Allegan last Friday night.

Jake Rueff rushed for 106 yards on six carries and scored three touchdowns. Lawton quarterback Landon Motter was 7-of-8 for 78 yards and a touchdown. He also ran for 21 yards and a score.

Carter Cosby led the defense with six tackles. Luke Leighton had a pair of interceptions. Rueff also had an interception.

In the loss to Sand Creek, the Bobcats finished with 277 yards rushing, led by Michael Palmer’s 174 yards on 27 carries and a pair of touchdowns. Quarterback Blake Krueger was 6-of-18 for 100 yards and a touchdown.

On defense, Brandywine gave up 363 yards on the ground, including 262 to John Alexander, who scored six touchdowns.

The Bucks are still looking for their first on-field victory of the 2021 season.

After receiving a Week 1 forfeit from Hartford, Buchanan has lost to Niles, undefeated Watervliet and South Haven.

The Bucks face a Kalamazoo Loy Norrix squad Friday night that is 0-4 after its 46-13 loss to Berrien Springs last Friday night.

Against the Rams, quarterback Connor LeGault was 17-of-28 for 189 yards and two touchdowns. Drew Glavin caught seven of those passes for 53 yards, while Dillon Oatsvall had five receptions for 52 yards. Thomas VanOverBerghe and Jack Ruth caught the touchdown passes.

The Bucks continued to struggle running the football as they finished the night with just five yards on the ground.

This is the second consecutive year that Buchanan and Loy Norrix has squared off on the football field. Last year the Bucks defeated the Knights 35-7. 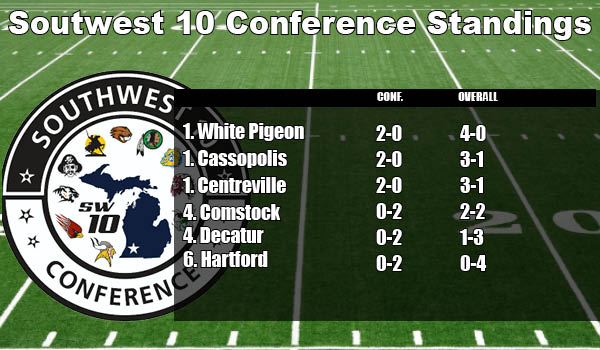 The Rangers will be looking to make it three straight wins as it heads to Decatur for a Southwest 10 Conference contest against the Raiders.

Cassopolis, which is 2-0 in league play, rebounded from its first loss in Week 2 to defeat Comstock and Hartford to open up Southwest 10 play. The Rangers outscored the Colts and Indians 68-0.

Decatur enters the contest having dropped three straight games after opening the year with a 27-22 win over Galesburg-Augusta. The Raiders are coming off of losses to Lawton, White Pigeon and Centreville.

Jeremiah Williams and Daishean Jamison continue to lead the Cassopolis ground game. Williams has rushed for 191 yards on 34 carries, while Jamison has 160 yards on 33 totes, Quarterback Collin Bogue has 117 yards on 20 carries through the first four games.

Defensively for the Rangers, Reggie Hart has 36 tackles and a forced fumble, while Daeton Gilliam has 34 stops, including a sack. Alex Dahlgren has 32 tackles and a trio of sacks. R.J. Drews leads the team with a pair of interceptions. He also had a fumble recovery.