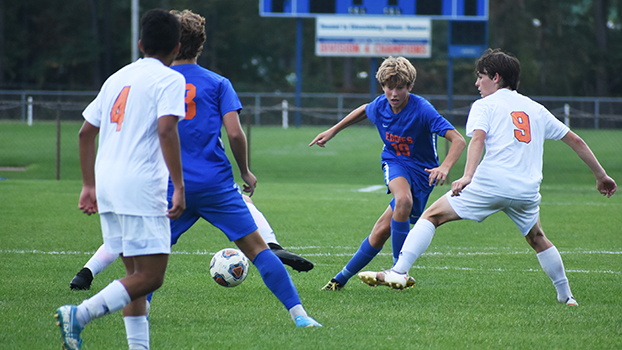 Devyn Arias (10) had an assist as the Eddies blanked Niles 7-0 to remain unbeaten in Wolverine Conference play. (Leader photo/SCOTT NOVAK)

NILES — Visiting Edwardsburg remained atop the Wolverine Conference standings with Plainwell and Vicksburg following its 7-0 win over Niles Wednesday night.

The Eddies improved to 4-0-1 overall in the league. The Trojans and Bulldogs also remained unbeaten with wins over Dowagiac (3-0) and Otsego (1-0), respectively.

Edwardsburg scored a goal early in the opening half and then made it 2-0 at halftime with a late goal. T.J. Gremaux put the Eddies on the board first with an assist from Henry Waldon. Gabe Titus scored the first of his three goals off an assist from Alex Carfi to cap the first-half scoring.

The Eddies would score five times in the final 40 minutes to turn the match into a blowout.

“Outside of the early goal, Niles did a good job of bottling us up,” said Edwardsburg Coach Sean Jesse. “We struggled to find space for much of the first half. It wasn’t until we got into a rhythm in the second half that the game opened up, and we were able to successfully find the back of the net.”

Titus opened the second-half scoring with a goal off the assist from Carfi, who would conclude the scoring with his goal, which Tye Vargo assisted. In between, Bodi Wegner, Emerick Zelmer and Titus scored goals.

Grayson Herbert on the Wegner goal, while Devyn Arias assisted on the Zelmer and Titus goals.

Edwardsburg will be looking to move a step closer to a title when it faces Plainwell Monday.

“The team this year set a goal of being conference champs,” Jesse said. “The conference championship often runs through Plainwell, so this game has some added importance. We know Plainwell is a solid team, but we have been improving every day — putting ourselves into a good position. We are looking forward to a competitive game and hopefully some high-quality soccer.”

“The Vikings had a tough loss tonight against Edwardsburg,” he said. “The Vikings started the game slow, but picked it up and got some opportunities on goal. We didn’t finish our shots and the Eddies capitalized on those opportunities. As a team, we take the loss and learn from it in hopes of making us better moving forward. We hope to correct our mistakes and finish our chances in tomorrow’s match.”

The Vikings will play their third match this week when they host Watervliet for a non-conference match Thursday. Play is set to begin at 5:30 p.m. 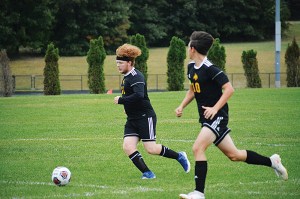 The Bobcats grabbed a 2-1 halftime lead and then score twice more in the final 40 minutes to seal the victory.

Pedro Segundo had the other goal for Brandywine, which got a pair of assists from Tyler Deming and an assist from Drew Deming.

The Bobcats are back in action Thursday as they head to St. Joseph to face Lake Michigan Catholic. The match is scheduled to begin at 5 p.m.