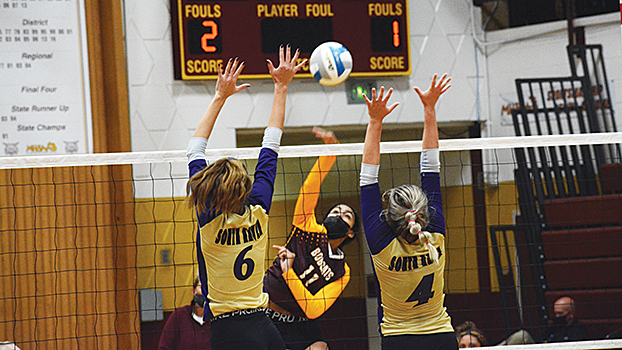 NILES — Liz Stockdale knew exactly what her team was in need of.

The Brandywine setter could tell her team’s energy was low after dropping set three to South Haven after winning the first two.

“After that third set, we talked about how we need to get our energy back,” Stockdale said. ”We have to play as a team, not just for ourselves. When we play as a team, we play much better.”

“We came out playing as a collective unit,” said Brandywine coach Emily Zablocki-Kohler. “Lots of talking and lots of excitement in games one and two. We kind of fell apart in set three and then we built up to it in game four.

“[Liz] always puts balls in play that no one else in the world would be able to play,” Zablocki-Kohler said. “Brummitt is our number two hitter most days and DePriest served amazing tonight. Our defense played really well on the back row. We’ve cleaned up our passing a lot and our serve-receive was much better. We’re making a lot of moves in the right direction.”

Zablocki-Kohler liked the way the team responded to adversity following the third set.

“We talk a lot about how we need to just do what we do,” she said. “We can only control what comes to us but we have to play as a team and we have to believe that everybody is going to do their part on the team. As long as we believe in each other, we play much better than if we have the slightest bit of doubt.

“We have to remember that we do trust our teammates, they’re out there and they’re going to get the job done.”

Stockdale has embraced the leadership role bestowed upon her.

“I try to make sure everyone is in a good mood and ready to play,” she said.

The Bobcats (8-8-2) will try to keep the momentum going through Saturday’s Buchanan Quad tournament. The quad will feature Buchanan, St. Joseph and Michigan Lutheran.

“We’re going into this playing three teams we already lost to,” Stockdale said. “We’re going to try to exact revenge on those teams. I hope we come in as a team and that we win and get our stuff together.”

It took longer to drive to Three Oaks than it did for visiting Buchanan to sweep River Valley in volleyball Wednesday night.

Buchanan will host a quad tournament scheduled to begin at 9 a.m. Saturday.