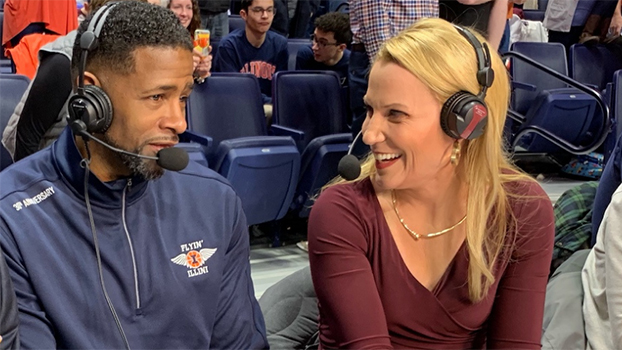 EAST LANSING — From Portage Northern, to Northwestern University, to the smallest of TV markets in the U.S. to the sidelines of the most recognized sports networks in the world, Lisa Byington has blazed trails all over the Midwest and beyond.

Beginning this October, she will take another historic step for women in sportscasting.

This will be just the latest accomplishment for the former Huskies basketball and soccer all-stater, who went on to play four seasons of basketball and two of soccer at Northwestern. Byington began her broadcast career at WBKB in Alpena – currently the third-smallest TV market in the nation – and then moved on to become a beloved fixture at WLNS in Lansing for nearly a decade. Her next moves took her into regional and then national spotlights, from broadcasting games with FOX Sports and the Big Ten Network, among a number of major entities, to working as a sideline reporter from 2017-19 at the NCAA men’s basketball tournament for CBS and Turner Sports.

She also was FOX’s play-by-play voice for the 2019 Women’s World Cup and for women’s and men’s soccer coverage on NBC Sports during this summer’s Olympics. She has done play-by-play for WNBA and NBA games, and in March, Byington also became the first female play-by-play voice at the NCAA men’s basketball tournament when she called games for CBS and Turner.

Byington was a finalist for the Miss Basketball Award as a Portage Northern senior in 1993, and according to the Detroit Free Press’ “All-State Basketball Team” report was set to graduate the following spring with 28 school records in hoops, including for 1,392 career points, 384 career assists and 379 career steals. She also made the Class A all-state girls soccer team as a senior after earning honorable mention as a junior. At Northwestern, she was a three-time Big Ten all-academic selection in basketball and two-time academic all-Big Ten pick in soccer.