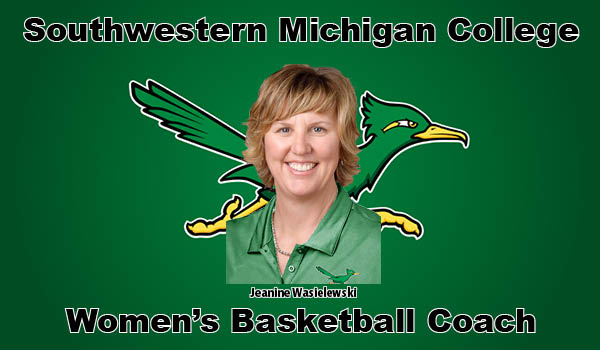 At a special meeting last September, the SMC Board of Trustees unanimously authorized the administration to pursue the return of National Junior College Athletic Association men’s and women’s cross country for fall 2021. The NJCAA approved SMC’s return to intercollegiate athletics, and in May of this year, the board authorized the revival of men’s basketball, women’s basketball, volleyball and wrestling for fall 2022.

Wasielewski will be working with Roadrunner Athletic Director Rodell Davis Sr. and the other head coaches to rebuild SMC’s athletic department, establishing policies and procedures to ensure compliance with all NJCAA and Michigan Community College Athletic Association regulations. She will also be consulting on the college’s extensive upcoming gymnasium renovation project and recruiting players to compete for championships.

A native of South Bend, SMC’s new head coach played Division I basketball at Northwestern University, winning the Big Ten Conference while appearing in 2 NCAA Tournaments and earning Academic All Big-Ten honors twice. After graduating with a bachelor’s degree in computer science, Wasielewski worked as a consultant for PricewaterhouseCoopers, LLP for 11 years before moving into the role of chief information officer and director of information technology for Molson Coors Brewing Company in 2002. At Molson Coors, she earned the company’s Copper Kettle Leadership Award and finished her master’s in business administration from the University of Denver in 2004.

Wasielewski then moved to Penn State University in a “fourth assistant” strategic specialist role for two seasons, planning practices and formulating game strategy for teams throughout the year, including Big Ten Conference and WNIT tournament play. For the past two seasons, she was an assistant coach at Saint Francis University in the NCAA Division I Northeast Conference, where she helped with all aspects of the program as the Red Flash compiled an overall 21-13 conference record.

“We couldn’t be more pleased that Coach Jeanine has agreed to lead our program,” said SMC President Dr. Joe Odenwald. “Not only are her business achievements impressive, but she has played and coached at the highest levels of women’s college basketball, and she’s ready to take the helm of her own team. We’re going to recruit committed student-athletes and support their success. I’m hoping we can hang a second national championship banner before too long.”

“It is an honor and a thrill to become the women’s basketball coach at SMC,” Wasielewski said. “I am inspired by the vision for athletics that Dr. Odenwald and his leadership team have put into action and embrace the challenge of building a program the Roadrunner alumni will be proud of. I look forward to using all my coaching and professional experience to build a culture where student-athletes will learn, grow and achieve on and off the court. It is time to get to work.”