Western Michigan get by Pittsburgh 44-41 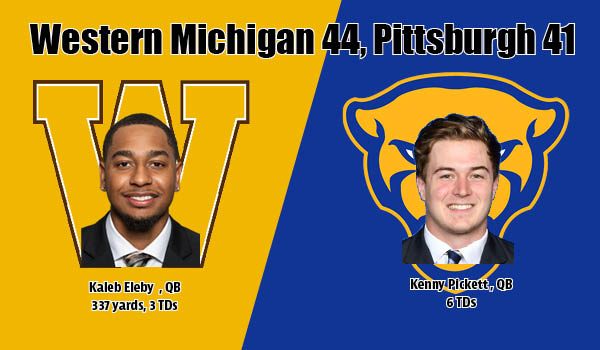 PITTSBURGH — The Western Michigan football team defeated the Pittsburgh Panthers, 44-41, on the road in front of 40,581 fans at Heinz Field on Saturday afternoon.

The win is the first over a Power 5 conference team for head coach Tim Lester.

The Broncos put up 510 yards of offense on Pitt and held the ball for a season high 40:15, limiting the Panthers to just 19:45 with the ball.

WMU recorded a season-high three turnovers on defense with two fumble recoveries and an interception. Junior linebacker Zaire Barnes had a career-high 10 tackles, two tackles for loss and both fumble recoveries. Middle linebacker Corvin Moment hade six tackles and forced a fumble. Senior defensive end had a key sack late in the game, while Braden Fiske had WMU’s other sack on the game.

With time winding down in the fourth quarter the Broncos held 44-34 lead until Panther quarterback Kenny Pickett threw his sixth touchdown of the game to cut the lead to three with just 3:48 left to play.

Western Michigan started the drive on its 25 after a touch back and quickly got sent back to its 22 after a three-yard loss on the first running play. Jefferson ran it for six yards on the next play to give the Broncos a big third and seven on their own 28. Eleby found Crooms for the eight time on the afternoon for the first down. Two plays later Tyler cracked off a 34-yard run to force the Panthers to take their final timeout.

Eleby handed it off to Jefferson for three straight plays to kill the clock and earn the victory.