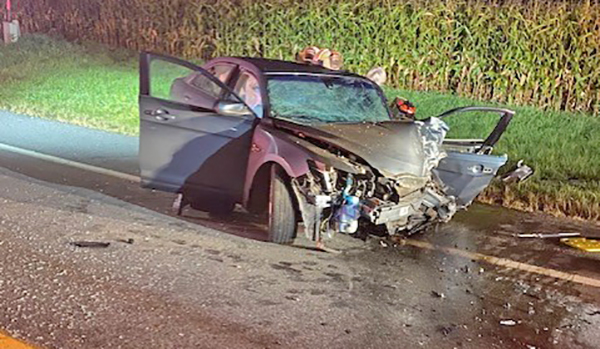 LA GRANGE TOWNSHIP — A Dowagiac woman was injured in a Wednesday night crash, according to the Cass County Sheriff’s Office.

Sheriff Richard Behnke reported his office is investigating a two-car injury crash on M-62, near Kingsbury Street, in La Grange Township.
Initial investigation shows that at 10:25 p.m. Wednesday, a southbound vehicle driven by Melissa Tripp, 38, of Dowagiac, was struck head-on by a northbound vehicle that crossed the centerline driven by Carol Slusher, 72, of White Pigeon. Slusher was flown was to South Bend Memorial for treatment, and Tripp was transported by ambulance to South Bend Memorial for treatment of her injuries.
Deputies were assisted on scene by the Cassopolis Police Department, Cassopolis Fire Department, SMCAS Ambulance, Edwardsburg Ambulance, and Memorial MedFlight.
Seat belts were worn in the crash, and alcohol and drugs are not believed to have played a factor in the crash, according to deputies.