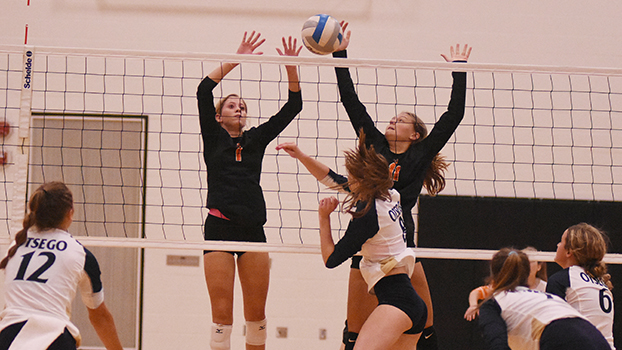 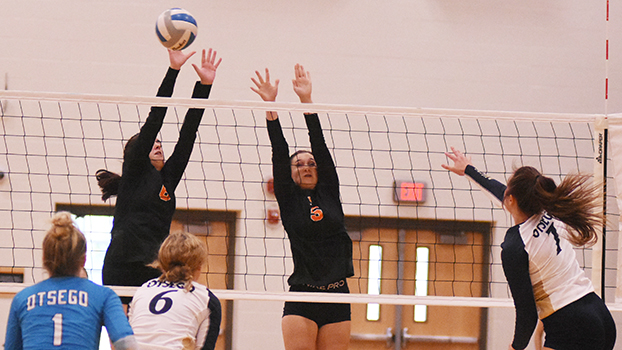 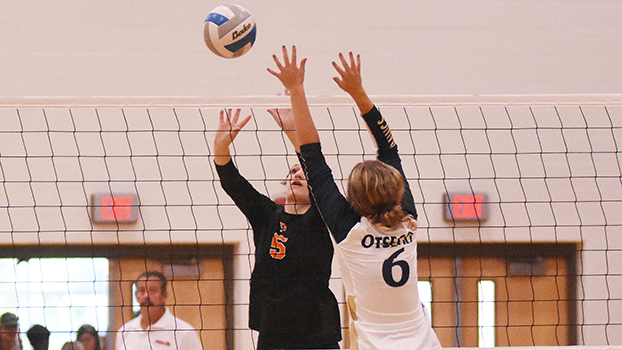 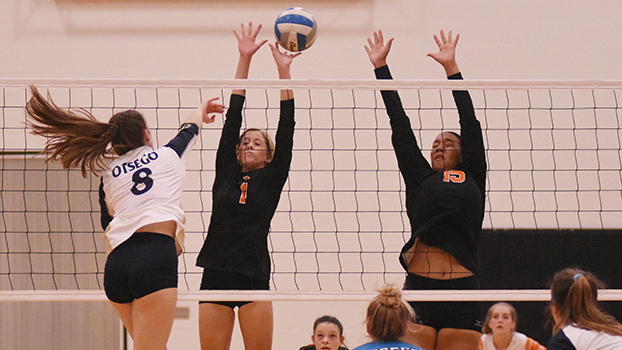 DOWAGIAC — It did not take long for visiting Otsego to find Dowagiac’s weak spot and exploit it Thursday night.

The Bulldogs reeled off 11 consecutive points to open the Wolverine Conference match on their way to a 25-11, 25-15 and 25-20 win over the Chieftains. It was Dowagiac’s first loss against league competition.

“Our ball control has been our weakest point all season so far,” said Dowagiac Coach Tony Hooley. “I knew when we started playing tougher teams that we were going to have to get better and we didn’t tonight.”

There was a silver lining, according to Hooley.

“Unlike in previous seasons, the ladies played hard and played better as the match went on,” he said. “Instead of mailing it in, they were still playing to win in the third set and turned the match around. The Lady Chieftains continue to work hard, and I will go to battle with them any day.”

The trio of Riley Stack, Megan Davis and Caleigh Wimberley were once again the top performers statistically.

Stack and Davis both finished with five kills, while Wimberley had three. Wimberley also had five digs, while Stack had four digs and five assists. Alyssa Dyer led the Chieftains defensively with nine digs. Emma Allen and Abbey Dobberstein both had a pair of blocks.

Hooley says every team has miscues during matches. It is how a team handles those mistakes that makes the difference between winning and losing.

“The game of volleyball, perhaps more than most other sports, is about managing the errors,” he said. “Every player makes them — from the best on the court to the least. If you play without mistakes at all, you might not be helping create points either. That’s especially true for net players. We just need to execute more efficiently on offense and pass better out of serve-receive.”

Dowagiac returns to the court Sept. 23 as it travels to Three Rivers for a Wolverine Conference match. Play is scheduled to begin at 6 p.m.

The Eddies returned to their winning ways Thursday night as they defeated visiting Vicksburg 25-16, 25-14, 16-25 and 25-20 in Wolverine Conference action.

Macey Laubach led the way with 11 kills and two aces, while Drew Glaser had six kills and six blocks. Danni Purlee had a team-high 16 digs. Lexi Shimpa led the team with three aces and 27 assists.

The Eddies head to the Portage Invitational Saturday. Pool play begins at 9:15 a.m.